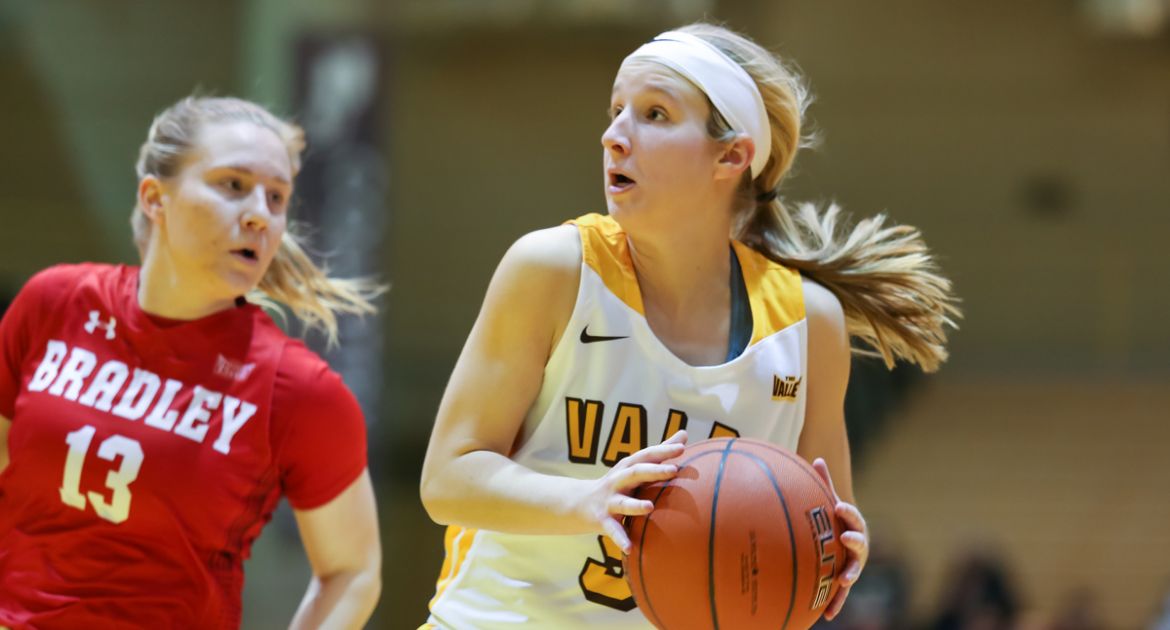 Shay Frederick had career highs in points and assists in her starting debut on Friday.
Bradley at Valparaiso | February 01, 2019
Related Links
Related Links

From the moment the Valparaiso University women’s basketball team finished Sunday’s game at Missouri State, it was clear that the Valpo freshman would join the starting lineup and take on an even greater role beginning on Friday. When the ball was tipped to start that game, she was ready – leading the way with career highs in points and assists in a 76-73 victory over Bradley.

The story of this game may start with Frederick, who was thrust into the starting lineup after Valpo had its second season-ending injury at the point guard position this season, but it sure doesn’t end there. This story was about a team – one that handed out 19 assists on 25 made baskets to help three players finish with 20+ points in a delightful victory at the Athletics-Recreation Center.

“We focused in on defense in the fourth quarter. During the timeout with four minutes to go, we talked about getting stops and scores. We wanted to do whatever it took to make that happen. Our players listened to a few adjustments we made and they went out and executed. They’re understanding how you win games, and that shows a real maturity of our team.”

“We wanted to try to eliminate Haack and Lasha Petree getting open 3s. They had 11 attempts and only made two, so I think we did a good job contesting most of them. Offensively, we came out and were extremely aggressive. We did a good job screening and pushed the ball well in transition. We attacked the basket and didn’t settle for early 3s. Our players did a great job working together to get quality shots.”

“Shay had to play a lot of minutes, so she’ll probably be sore tomorrow even though she’s only 18. She came in and did what Shay does. She’s a talented and gifted offensive player, and she found some shots early and knocked them down. She’s an exceptional passer, and she found open players and helped us get easy baskets late in the game by delivering outstanding passes on time.”

“It’s always nice to be home. You’re in front of your crowd and you have energy in the gym. On the road, there is often a big crowd for the opposing team giving them energy. Our crowd does a nice job providing that energy, and I think our players enjoy being home in front of their friends and family. It’s also nice being at home prepping for games. We’ve taken the two longest road trips in the conference over the last three weeks. That’s hard on our players’ bodies. We’ve tried a lot of things to help ease some of that, but it’s still difficult.”

Valpo (6-14, 2-6) will shoot for consecutive victories on Sunday as the team welcomes Illinois State to the Athletics-Recreation Center for a 1 p.m. game. The contest can be viewed on ESPN3, heard on 95.1 FM Valparaiso or followed via live stats.