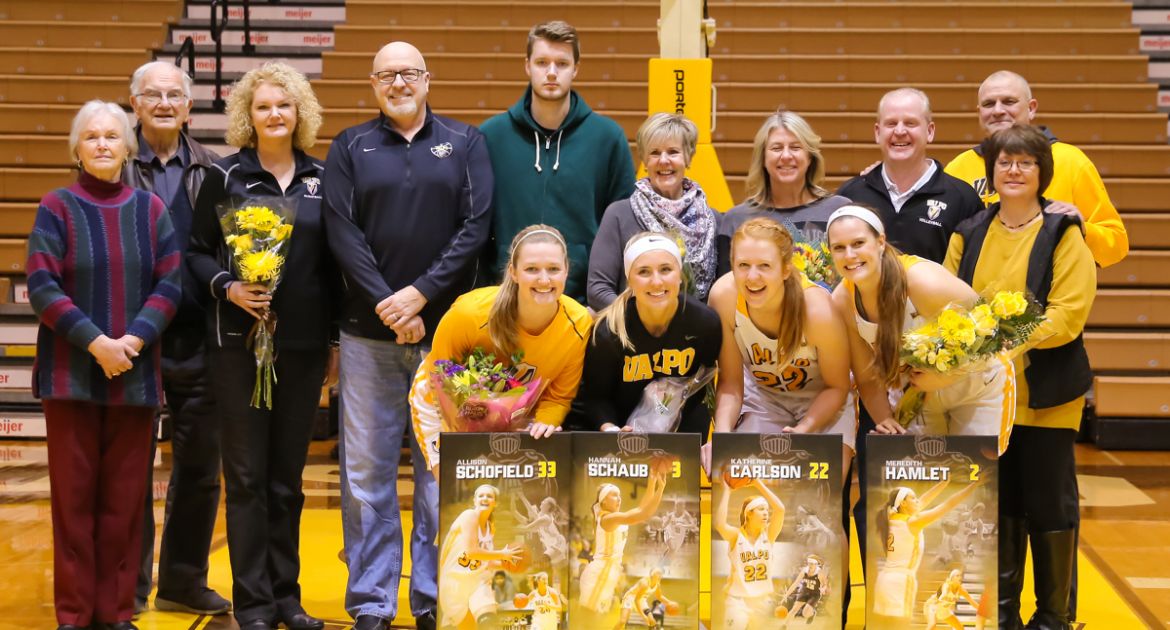 From laughter to tears and everything in between, Saturday ran the full gamut of emotions for the Valparaiso University women’s basketball seniors. But when this year’s seniors stepped off the Athletics-Recreation Center floor for the final time, the emotion they felt was one of delight after turning around a 26-point loss in the conference opener on Jan. 6 at Loyola to beat those same Ramblers 81-74. A game that exemplified the program’s progress over the course of the season saw all five starters finish in double figures in a true team effort.

“It feels great to get the win today. This team has continued to fight and continued to grow, learn and get better. I’m happy for them that they got to experience this feeling of winning, because it’s a fantastic feeling. They’ve worked very hard, and I hate that they haven’t been able to experience it more this year, because they’ve really grown as a team.”

“A lot of the success in that second quarter started with our defense. We matched Loyola’s physicality and got some stops that led to easier scores. Up and down offensively, we started working together and driving and sharing the basketball. They’re a physical and aggressive team. Our players came out and played aggressively in that quarter.”

“Late in the game, we needed to get a couple stops. We got one or two, and that allowed us to come down and use more clock. Grace made a big play late. We ran something for her to drive it, and she came down and scored. It was a collective effort for us defending as a group. Finishing each play with a rebound, playing smart and taking time off the clock all contributed to us sealing the victory.”

“Addison played a great game. She did what she can do. Her teammates did a great job taking care of the basketball and creating space for her to drive. She’s only as good as her teammates let her be by sharing the ball and working to get her space. This is a very team-oriented offense. I’m happy we did that, and she took advantage. Everybody was fantastic today. Our efficiency was unreal. They were really dialed in, and it was exciting to watch them play.”

“I’m so excited that our seniors got to go out with a win. They’ve been a great group of very selfless people that have become great leaders for this team and accepted this change with an open heart and mind. They’re a special group, and they’re going to mean a lot to me for years to come. I look forward to watching them grow, being at their weddings and sending them Valpo jerseys for their babies.”

Valpo (7-23, 3-15) will compete in the opening round of Hoops in the Heartland on Thursday in the first game of the tournament at 4 p.m. at the TaxSlayer Center in Moline, Ill. Eighth-seeded Indiana State will be the opponent for a game that will be broadcast on ESPN+. Links to live video, audio and stats will be available on ValpoAthletics.com.