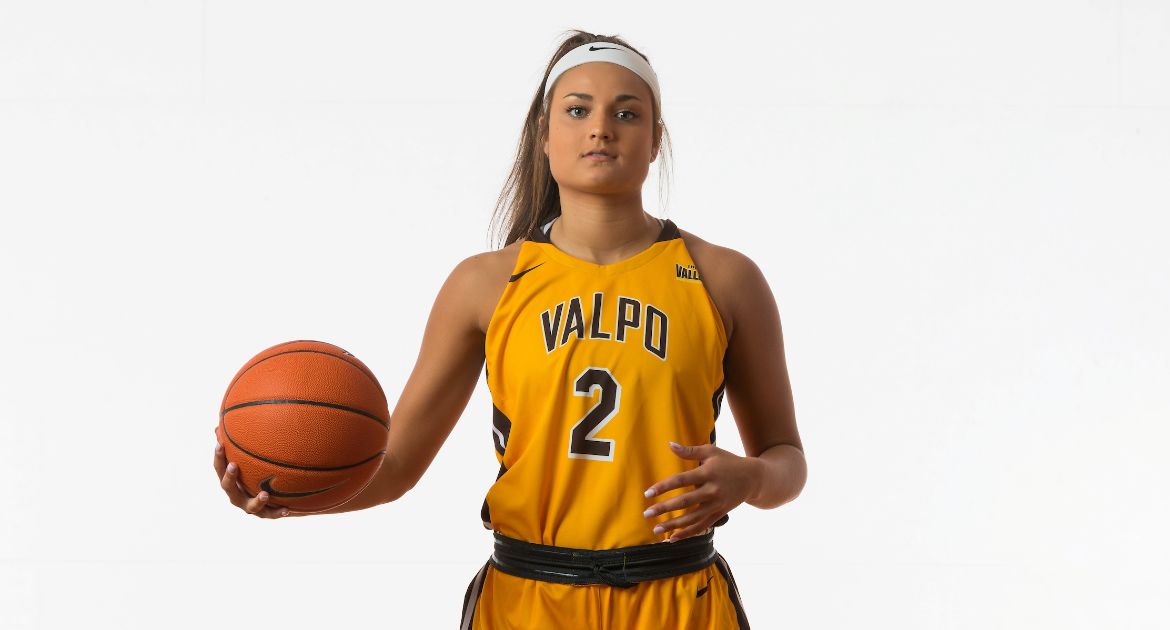 Next Up in Valpo Basketball: Fresh off a come-from-behind victory at the ARC Sunday afternoon, the Valpo women’s basketball team takes on its second consecutive MAC opponent as it makes the trip to Toledo for a Wednesday night showdown. The matchup with the Rockets is Valpo’s third game in its first six against an opponent who appeared in the postseason last year.

Previously: A wild affair Sunday afternoon at the ARC saw the Valpo women’s basketball team rally from a 12-point fourth-quarter deficit, tying the game within the final 30 seconds on a 3-point play off an offensive rebound from junior Grace White, and score the first five points of overtime on its way to a 95-90 victory over Bowling Green State University. Senior Grace Hales and sophomore Shay Frederick tied for team-high honors with 21 points each, both matching their respective career high.

Head Coach Mary Evans: Mary Evans (10-27) is in her second season as head coach of the Valpo women’s basketball program in 2019-20. Evans’ impact on the program was immediately clear in her first year, as Valpo shattered its previous program record of 224 made 3-pointers in a single season by knocking down 276 trifectas - a mark which ranks seventh in MVC history. Valpo ranked among the top-25 nationally in both total 3-pointers and 3-pointers per game in Evans’ first season at the helm of the Valpo program.

Series Notes: Valpo and Toledo have split their prior two meetings, as the Brown and Gold captured a 63-61 win in Toledo on Dec. 7, 2013 and the Rockets reciprocated with a 65-59 victory at the ARC last season on Nov. 26, nearly one year ago to the date of Wednesday’s matchup. Valpo’s win was capped by a putback from Sharon Karungi with three seconds to play, while the Rockets held off a charge last year that saw Valpo cut an 11-point deficit to just four in a span of 31 seconds in the final minute. Meredith Hamlet led Valpo in last season’s meeting with 26 points, while Shay Frederick handed out six assists in 28 minutes off the bench.

...versus Bowling Green
- Valpo trailed by 12 with 8:32 to play in regulation before quickly rallying to within three, 69-66, with under seven minutes to go.
- BGSU pushed its lead back to 74-66 as the clock ticked under 3:30 remaining, but a 3-point play by Grace Hales and a 3-pointer from Cara VanKempen made it a two-point game with 2:44 to go.
- The teams traded blows from there. The Falcons got a 3-pointer with 45 seconds to go to make it a four-point game, but Valpo raced the ball down and got a quick basket from Shay Frederick.
- BGSU split a pair of free throws before Grace White grabbed an offensive rebound and put it back through contact for a 3-point play with 20 seconds to play, forcing overtime.
- The lid lifted on the scoring in overtime 1:21 into the extra period, as Frederick hit junior Ella Ellenson for a 3-pointer which gave Valpo the lead for good. A circus layup by White on the next trip pushed the advantage to five points, and BGSU never had the ball with a chance to tie or take the lead the rest of the way.

...at Northwestern
- The Wildcats pulled out to a 13-4 lead halfway through the opening quarter, but Grace White scored on back-to-back possessions, the latter a 3-pointer, to make it a 13-9 game with 4:08 to play in the period.
- Sophomores Shay Frederick and Ilysse Pitts each connected on a 3-pointer in the final two minutes of the first quarter as Valpo was within 20-15 at the end of the opening period.
- Valpo struggled offensively in the second quarter, scoring just three points on 1-of-8 shooting from the field while turning the ball over eight times. The Brown and Gold held Northwestern to 15 points in the period, but it was still enough for the Wildcats to pull out to a 35-18 halftime lead.
- Valpo was within 15-13 of Northwestern in the third quarter and 19-17 in the fourth quarter.
- White led the way in scoring for the first time in a Valpo uniform, going 5-of-8 from the floor and a perfect 4-for-4 from the foul line for 15 points.
- Prior to Thursday, Profitt’s only game action since March of 2018 was seven minutes in the season opener against Ohio State. Thursday, Profitt took full advantage of her 15 minutes of action off the bench, hitting all three of her field goal attempts – including her first career 3-point attempt – and a trio of free throws for 10 points, matching her career best against a D-I foe.
- Abi Scheid led Northwestern with 21 points, but Valpo limited Lindsey Pulliam – who entered the game averaging 23 points/game and coming off a 26-point effort in the Wildcats’ win at Duke – to just two points on 1-of-12 shooting, matching her career low.
- Valpo shot just 34.8% (16-of-46) from the field for the game and was just 6-of-25 (24%) from 3-point range. The Brown and Gold held Northwestern to 37.5% (24-of-64) shooting, but the Wildcats connected on 8-of-21 (38.1%) shooting from behind the arc.

...looking ahead
- Valpo had eight days off before its next game, a morning tipoff from Detroit Mercy on Thursday, Dec. 5.
- The Brown and Gold will then stay away from competition during final exam week, returning to action Sunday, Dec. 15 at the ARC against UIC.

...on the road
- Valpo is 1-2 in true road games this year, most recently falling at Northwestern in the third of six true road non-conference games.
- The road win at NDSU was Valpo’s largest true road win since a 13-point victory at Evansville on Feb. 25, 2018.
- Valpo posted a 2-12 record in true road games last season in Coach Evans’ first season at the helm.
- Both of Valpo’s road victories came in non-conference action, as it defeated Chicago State and Purdue Fort Wayne.

@ToledoWBB
- Toledo enters Thursday’s game at 1-3 on the year, falling in each of its last three games - most recently an 83-76 home loss to Memphis on Sunday.
- The Rockets’ early-season slate also included a game at Notre Dame, a contest they dropped by a 54-51 final.
- Tatyana Davis has led Toledo through four games, averaging 11.5 ppg and hitting at a 42.1% clip from the 3-point line.
- Nakiah Black led the way for the Rockets last time out with 18 points.

Comeback Kids
- Valpo didn’t blink at the deficits it faced on Sunday, as it rallied for the come-from-behind victory over BGSU.
- The Crusaders faced a maximum deficit of 13 points with 30 seconds to play in the first half before banking in a 3-pointer at the horn to make it a 10-point game at the break.
- It doesn’t take a large memory bank to remember the last 13-point deficit Valpo overcame to win a game, as it erased that exact margin in last season’s MVC Tournament win over Indiana State.
- However, it would require a bit more encyclopedic knowledge to recall the last time a Valpo team rallied from down 12 in the fourth quarter.
- In fact, it hasn’t happened since the move to quarters - the last time Valpo trailed by 12 or more in the final 10 minutes of a game and won came on Feb. 17, 2011 at Loyola, when it was down 63-49 with 8:45 to play and roared back for a 72-68 victory.

BGSU Gallimaufry
- Valpo’s 95 points in the BGSU win marked its highest point total since dropping 101 on Evansville in January 2018.
- It was Valpo’s first overtime win since defeating Detroit Mercy in the 2016 Horizon League Tournament, 94-91. That was also the last time Valpo won a game in which it surrendered at least 90 points.
- Valpo delivered 10 3-pointers in the win, its second time knocking down double-digit triples. After going just 3-for-16 in the first half from deep, Valpo was 7-for-17 from the 3-point line over the final 25 minutes.
- Leading Valpo’s 27-of-32 effort from the foul line was Shay Frederick, who finished 13-of-14 – tied for the fifth-most free throws made in a single game by a player in Valpo history, and the most since Ashley Varner connected on 13 at Cleveland State in February 2012.
- Frederick’s 13 free throws propelled her to a 21-point night to tie her for team-high honors and match her career high.
- Grace Hales enjoyed a very efficient afternoon to end up with 21 points to match her career best as well. The senior was 7-of-10 from the field and a perfect 7-for-7 from the foul line.
- Carie Weinman rounded out the Valpo trio in double figures with her high in the Crusader uniform, tallying 18 points on 6-of-10 shooting from the floor. The sophomore went 4-for-8 from 3-point range after going just 4-for-20 from deep over the first four games.
- Cara VanKempen, who had totaled zero points and one rebound in her first two appearances with Valpo, finished with nine points and four rebounds on Sunday as she connected on three 3-pointers. Perhaps most impressively, that came in 18 minutes of action - all of which came after halftime.

Avenging Defeats
- Sunday’s win over Bowling Green was already Valpo’s second of the year versus a program it lost to last season.
- Valpo is now 2-1 this year in such games, defeating North Dakota State and BGSU, while dropping a two-point decision at North Dakota.
- On average, Valpo has improved the scoring margin in those three contests by an average of 10.3 points/game.
- In all, six of Valpo’s non-conference matchups are opportunities for it to flip a result and beat an opponent it lost to last year - North Dakota State, North Dakota, Bowling Green, Toledo, UIC and Morehead State.

Life on the Road
- This year’s Valpo squad is getting well acclimated to life away from home, as the Toledo game is part of an opening stretch in which it will play six of its first seven games away from the ARC - including the first four.
- The last time a Valpo team opened a season with this kind of stretch was back in 2013-14, as that season began with eight of nine away from home.
- Valpo’s second home game this season will not come until Dec. 15, and it’s been a quarter century since the Brown and Gold have gone that deep into a season before a second home game. In fact, the 1994-95 team didn’t contest its home opener until Dec. 20, and didn’t appear at home for a second time until Jan. 7.

Non-Conference Challenges
- Wednesday’s game against Toledo, which advanced to the second round of last year’s WNIT, will be the third of four non-conference matchups for Valpo against postseason teams from a season ago.
- Valpo opened the season against Ohio State (WNIT) and played at Northwestern, a WNIT finalist, last week.
- The quartet of WNIT opponents rounds out with a home game at the ARC against Morehead State - which defeated Ohio State in the opening round of last year’s WNIT - on Dec. 17.
- That sets the stage for an MVC slate which features two matchups apiece against three postseason teams last year: Missouri State (NCAA Sweet 16), Drake (NCAA) and UNI (WNIT).