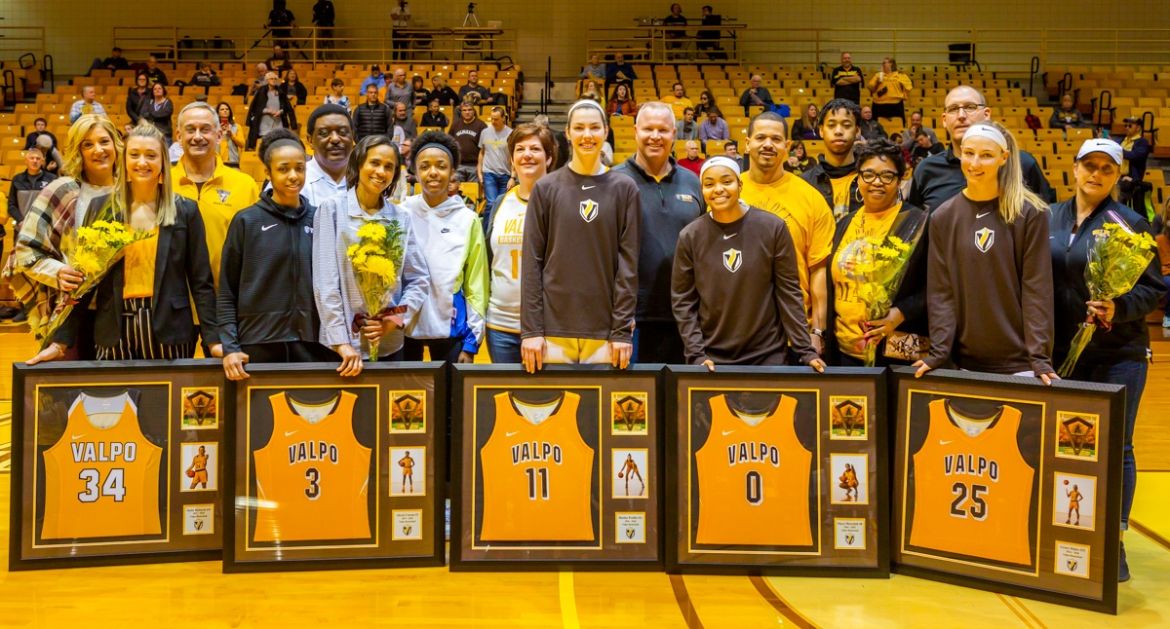 Valpo's five seniors were honored prior to the game.
Drake at Valparaiso | March 01, 2020

The final regular season home game of the year at the ARC for the Valpo women’s basketball team provided yet another reminder of how far the program has come over the last few years, as the Brown and Gold battled toe-to-toe with MVC powerhouse Drake throughout Sunday afternoon’s contest before the Bulldogs escaped with an 83-79 victory. The game served as the program’s annual Senior Day, as Valpo honored the five members of its senior class prior to the game.

“I’m so proud of our players – they came out, they were really focused yesterday in practice, they were really focused in shootaround. Sometimes you don't know how your team is going to react after a big win, and obviously Friday night was a really big win for this program. But they came out here and they wanted to give Drake their best shot, and I really do think they got close to our best shot. We made mistakes, but there's always going to be mistakes in the game of basketball. The way they fought, the way they stayed together, the way they kept their composure was admirable.”

“Ella Ellenson was huge for us tonight. She comes in off the bench and goes 4-of-5 from the 3-point line - other people weren't able to hit some looks, and she really stepped up and hit some big shots.”

“It was just a really great overall team game, and I hate it for our players right now, because they worked their tails off and came close, came up just a little short.”

Valpo (16-11, 8-8 MVC) opens the final pair of games of the regular season Thursday night at nationally-ranked Missouri State. The game, slated for a 7 p.m. tip, can be seen live on ESPN+.