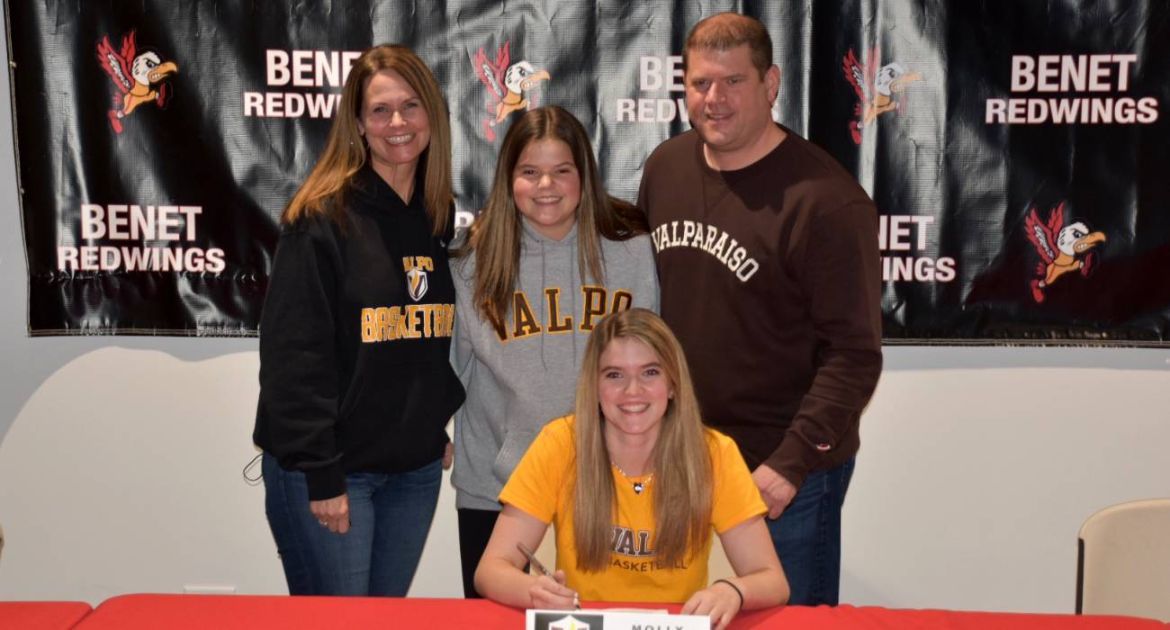 Imagine being a freshman and not only making your high school varsity basketball team, but also leading the team in scoring, assists and minutes played.

Now imagine giving that up to make a move to a school where there would be no guarantee of any playing time.

That was the decision that Valpo women’s basketball signee Molly Sheehan and her parents made following her freshman year, as she transferred to Benet Academy.

“I’ve always wanted to make varsity as a freshman at Hinsdale, and I made varsity as the sole freshman on the team,” Sheehan said. “It was great for me to learn valuable basketball lessons at only 13 years old, but after that year, my parents and I decided that transferring to Benet Academy would be the best decision for me as a player and us as a family.”

While Sheehan joined some of her AAU teammates at Benet Academy, helping to ease the transition, it was still a whole new world she faced on the court.

“It was intimidating coming from a school where I was ‘top dog’ to join a state/nationally ranked team with 10+ Division I athletes and being the third option at the point guard spot my sophomore year,” Sheehan said. “Every girl at Benet could have been the star at their local high school, but by deciding to play for Coach Kilbride and wanting to compete for a state ring, we all chose to be a part of something bigger than ourselves, and that’s ultimately where our individual and team success is rooted from.”

As a sophomore, Sheehan saw limited playing time, as she was behind one of the state’s top point guards. But even with the limited action, she still saw the growth in her game.

“Being surrounded by like-minded players who all have the same college aspirations in mind, my game was constantly improving regardless of the minutes I got to show for it,” Sheehan said. “Playing for such a successful and deep team, every day in practice we compete against the best girls in the state. Our practices get very competitive and scrappy, and we hold ourselves to such a high standard that allows us to, when game time comes around, play our best basketball and put so many tallies in the win column.”

Her junior year saw Sheehan settle into a sixth man role for Benet Academy as she helped the Redwings reach the top spot in the state rankings and as high as 14th nationally.

“I learned to love the ‘underrated’ role and it motivated me to continue to outwork everyone around me and get better, regardless of what the starting lineup was,” Sheehan said. “I think my transfer to Benet has been an experience I needed to grow and mature my game both physically and mentally, and appreciate everything ‘all in due time’.”

The COVID-19 pandemic threw a wrench in the recruiting process for Sheehan, as it did many others. But with Valpo having watched her play quite a bit over the previous two years, she felt a connection right from the start with the program.

“From my very first Facetime call with Coach Gabby to every conversation I’ve had with the staff and Coach Evans, I have felt nothing but true interest in me not just as a player, but most importantly as a person as well,” Sheehan said. “It has been so easy to form a genuine relationship with everyone on the staff. Coach Evans and her staff did a great job adjusting their recruiting process through this pandemic to get to know myself and my family better, and my family and I have felt nothing but a real and natural connection from the beginning with this amazing staff.”

While she might not have been able to take a normal official visit, Sheehan and her family did find it important to take a trip to campus earlier this year.

“Although I wasn’t allowed to visit Valpo officially and meet the staff and team in person, in April my parents and I drove the 75 minutes to Valpo, just to walk on campus and see the downtown area,” Sheehan said. “Even though we couldn’t go inside any facilities, I got a great idea of campus – it has everything I want in a school from a location and size standpoint.”

When she comes to campus next fall, Sheehan — who skipped a grade when she was younger — will be enrolled in Valpo’s College of Arts and Sciences, where she plans to study psychology and/or journalism. On the court, she’s excited for what she’s going to bring to the women’s basketball program.

“I think my best attributes are the intangibles: the energy, enthusiasm, leadership, and communication,” Sheehan said. “Being in that point guard spot, you’re naturally in a leadership role on the team, so it’s important to be an extension of coach out on the floor. I’ll bring great energy to the team and always put the team first, and give 110% to every play. I think my biggest strengths include handling the ball and pressure as well as my passing game and finding the open player. I’m also confident in my ability to shoot the three and the consistency I’ve been able to find from behind the arc.”