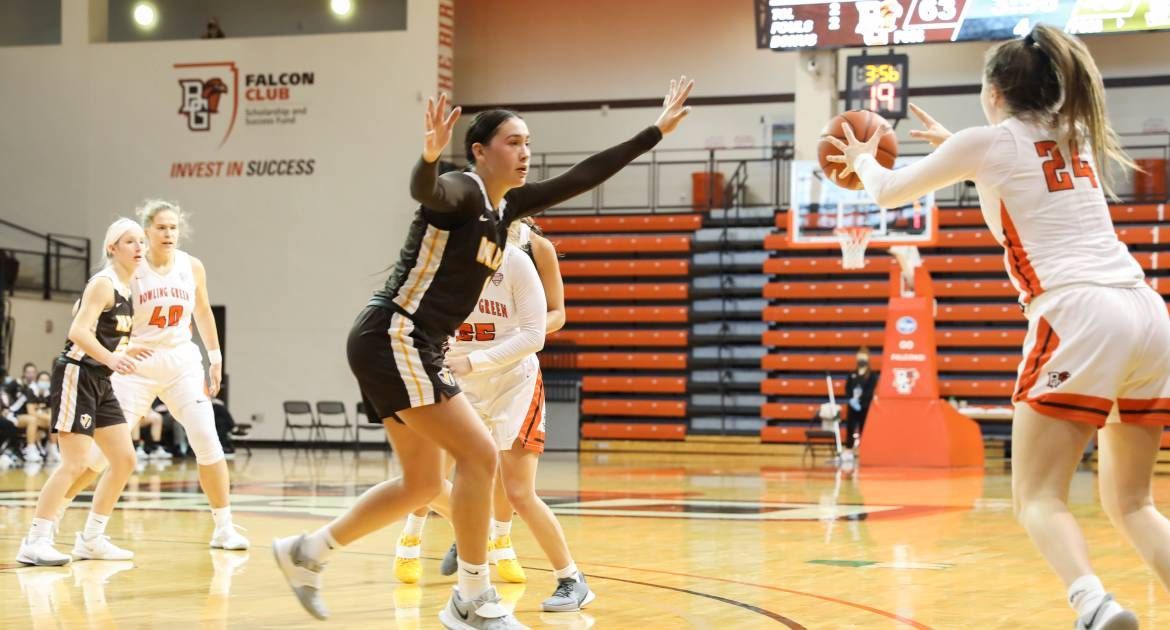 The Valpo women’s basketball team went on an 11-2 run to close out the third quarter of its season opener Sunday afternoon at Bowling Green, closing to within one point with 10 minutes to play, but the Falcons answered with a run of their own to start the fourth quarter as Valpo fell by a 70-60 final. Senior Grace White (Redby, Minn./Red Lake [Denver]) paced the offense with 15 points, while freshman Leah Earnest (Stevens Point, Wis./SPASH) had a strong debut as she tied for game-high honors with 10 rebounds.

-        Valpo kept Bowling Green off the board for a stretch of over five minutes in the middle period, but could only muster five points of its own in that same time period to cut a six-point deficit to one. The Falcons hit four free throws in the final minute of the first quarter to lead 13-8 at the end of one.

-        BGSU opened the second quarter with eight of the first 11 points to pull out to a double-digit lead, but Valpo responded with seven straight — including a 3-pointer from junior Shay Frederick (Greenville, Wis./Hortonville) — to pull within 21-18 at the midway point of the period.

-        The Brown and Gold cut the deficit to one point three times in the final four minutes of the first half, but never got over the hump to take the lead, and BGSU eventually led 34-30 at intermission.

-        White got Valpo on the board 30 seconds into the second half with a bucket to make it a two-point game. Valpo went scoreless for nearly the next five minutes, however, and the Falcons extended their lead to seven points at the media stoppage.

-        BGSU pushed out to a 46-36 lead with 2:51 to play in the third quarter before Valpo put together another quick spurt. Senior Marlee Profitt (Medina, Ohio/Highland) answered a Falcon 3-pointer with a triple of her own, Earnest converted a fast-break layup off a steal by junior Carie Weinman (Glenview, Ill./Glenbrook South [Denver]) and Profitt stole a rebound away from a BGSU post and laid it in for a quick seven points in 48 seconds.

-        An inside basket from White in the final 40 seconds of the third quarter capped an 11-2 run, made it a 48-47 BGSU lead with 10 minutes to play and put Valpo in position to take the lead to start the final period.

-        Valpo was unable to continue the momentum into the fourth quarter, however, as BGSU reeled off the first 13 points of the period over the first five minutes to take control.

-        The junior added six rebounds — including four on the offensive end — set a career high with four blocked shots and matched her career best with four steals.

-        Frederick joined White in double figures with 11 points and Profitt hit all three of her field goal attempts to finish with seven points. Profitt also registered two blocked shots for the first multi-block game of her career.

-        Earnest made an immediate impression on the glass in her debut, tying for game-high honors with 10 rebounds. She is just the second Valpo rookie to reach double figures in rebounds in her first collegiate game in the last 25 years, and the first to do so against D-I opposition.

-        Weinman posted nine points and six rebounds as well. The MVC leader in steals last year, she also continued her work in that category, matching White with a game-high four thefts.

-        The Falcons out-rebounded Valpo by a 48-36 margin, thanks in large part to 17 offensive rebounds. BGSU also took advantage of 25 Valpo turnovers to score 26 points, while the Brown and Gold scored just 17 points off 21 Bowling Green turnovers.

-        Valpo tallied 14 steals and blocked seven shots in the losing effort Sunday, both of which were marks it surpassed just twice last season.

“It has been a long break after having the end of last season cancelled, and our team — like every team in the country — has been dealing with all the new COVID rules and restrictions. This was our first opportunity to play against someone other than ourselves, and so I think everyone was excited and ready to get back on the court.”

“I thought that we picked up our defensive energy during the run at the end of the third quarter and got some steals that led to some easier baskets. We also did a better job attacking the rim via penetration and by offensive rebounding.

“Conversely, I thought to start the fourth quarter, we got careless with the basketball and had some turnovers that lead to easy points for BG. They also got some offensive rebounds that resulted in either fouls or easy buckets. We have to do a better job taking care of the basketball and keeping other teams off the boards. 25 TO’s and giving up 17 offensive rebounds is not the formula for winning basketball games. We will watch film tomorrow and get to work to fix these very correctable issues.”

“I thought that Grace really stepped up today. She is a really talented player who can do a lot of different things on the floor. I am really proud of the way she defended and rebounded today. It is something that we have talked about, and I really think she came out and competed from start to finish.”

“When we recruited Leah, we knew one of her strongest skills was rebounding. I think she came in and showed everyone what a great ability she has to do that on a night in and night out basis. She does a great job of going and getting balls out of her area.”

“We will get in the film room and on the court and correct the things we did poorly. Our program is built on continuous improvement and working to play our best basketball by March. I have no doubt our players will come in hungry tomorrow and we will get better going into our game at U of I on Wednesday.”

Valpo (0-1) continues its four-game road stretch to kick off the season on Wednesday evening with a 5 p.m. tipoff at Illinois. The game can be seen live on BTN+ and heard live on WVUR (95.1 FM, Valparaiso).