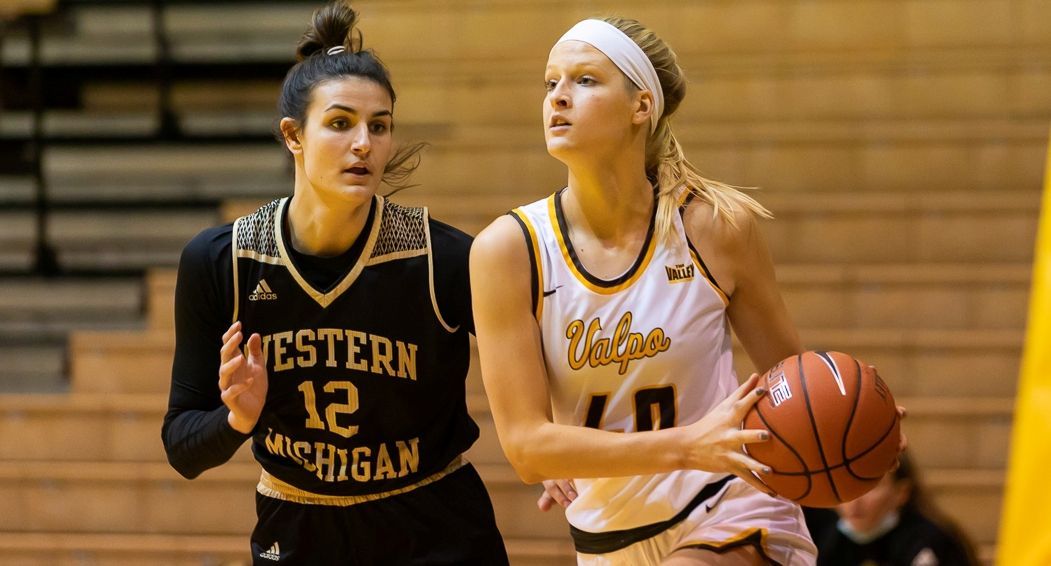 Carie Weinman (Glenview, Ill./Glenbrook South [Denver]) and Caitlin Morrison (Glenview, Ill./Glenbrook South) have shared the court plenty over the years, playing prep and AAU basketball together prior to teaming up together at Valpo. Saturday likely ranks up there as one of the most memorable performances for the duo, as Morrison set a new career high in the scoring column and Weinman posted her highest output in a Valpo uniform to lead the way as the Valpo women’s basketball team rolled to a 75-51 victory over Western Michigan in the home opener Saturday.

-        WMU scored the game’s first point 53 seconds in, but a Morrison 3-pointer 11 seconds later was a harbinger of things to come and gave Valpo the lead for good.

-        Valpo scored 11 straight points — five of which came courtesy of Weinman — following WMU’s first point to take an 11-1 lead at the first media timeout. The Brown and Gold held the Broncos without a field goal for the first 6:29 of the game.

-        WMU closed to within six twice late in the first quarter, but in the final 63 seconds, Weinman got a steal and fast-break layup, followed by a 3-pointer on Valpo’s next possession to push the advantage to 18-7 at the end of 10 minutes.

-        Weinman’s hot hand continued into the second quarter, as she connected on two 3-pointers in the first two minutes of the period to push the lead to 24-7 and force a timeout by WMU. At that point, Weinman already had 16 points, just 12 minutes into the contest.

-        Morrison scored five points of her own following the timeout as the lead broke into the 20s, and when freshman Leah Earnest (Stevens Point, Wis./SPASH) got a put-back basket with 6:09 left in the first half, Valpo had scored 18 straight over a span of seven minutes and enjoyed a 31-7 lead.

-        The Broncos did score seven straight points late in the second quarter to cut the deficit to 19 points, but a layup on the break following a steal for junior Shay Frederick (Greenville, Wis./Hortonville) and a last-second layup by Morrison gave Valpo a 38-15 lead at intermission.

-        Western Michigan would get no closer than the halftime deficit the rest of the way, while Valpo’s lead reached an apex of 32 points at 63-31 late in the third quarter on a triple by Frederick. The advantage was 63-33 at the end of three quarters as Valpo cruised to the win.

-        Weinman was spectacular in leading the way Saturday for the Brown and Gold. The junior was 9-of-12 from the field, including a perfect 5-of-5 mark from the 3-point line, to finish with a game-high 24 points.

-        The 24 points set a new best in the Valpo uniform for Weinman, whose previous high in the Brown and Gold came with a 21-point effort at Loyola last year.

-        Weinman’s nine made field goals also set a new personal best at Valpo. She also racked up four steals on the defensive end to lead all players — the fourth time already this season she has picked up four steals in a game.

-        Meanwhile, Morrison not only reached double figures in scoring for the first time this year, but surpassed her career best as well. The senior poured in 18 points on 8-of-12 shooting from the field, one-upping her previous best effort of 15 points last year in the home game against Bradley.

-        Morrison came up with a strong effort on the glass as well, matching her career best by pulling down 10 rebounds to finish with the first double-double of her career. She also tallied three steals and blocked a pair of shots as well.

-        Frederick joined the aforementioned duo in double figures with 13 points, including three 3-pointers, and tied her career high for the fifth time by dishing out eight assists. The junior also picked up three steals.

-        The Brown and Gold racked up 12 steals as a team, the second time this season they’ve reached double figures in the category. In total, Valpo scored 27 points off 19 WMU turnovers.

-        Valpo won its home opener and extended its streak of home nonconference victories to five with Saturday’s win.

-        Freshman Ava Interrante (McHenry, Ill./McHenry) scored the first basket of her Valpo career in the fourth quarter, while fellow rookie Jayda Johnston (Roseville, Minn./Roseville Area) made her debut and grabbed a rebound.

“I was really pleased with the way we started the game today. We came out with a really good defensive energy and were able to take Western Michigan out of what they want to do. We made a lot of plays on that end and turned them over in the first half quite a bit.”

“Overall, I’m pleased with the way the game went. We got some good minutes today from our young players. I was really, really happy with the way Carie and Caitlin played - I think that's probably Caitlin's best game that I've coached her.”

“Rebounding is something we talk about every day - that's something that we need to get figured out, and when we do figure it out, it will elevate us to become an even better team. I thought both Ella and Caitlin came out in the first five minutes and really took care of the defensive glass, and that got us off to a good start and set a good tone for the game.”

Valpo (3-2) stays at home for its second and final nonconference home game of the 2020-21 slate, hosting Xavier for a Wednesday matinee. Tipoff is slated for 1 p.m., and the game can be seen live on ESPN+ and heard on WVUR (95.1 FM, Valparaiso).