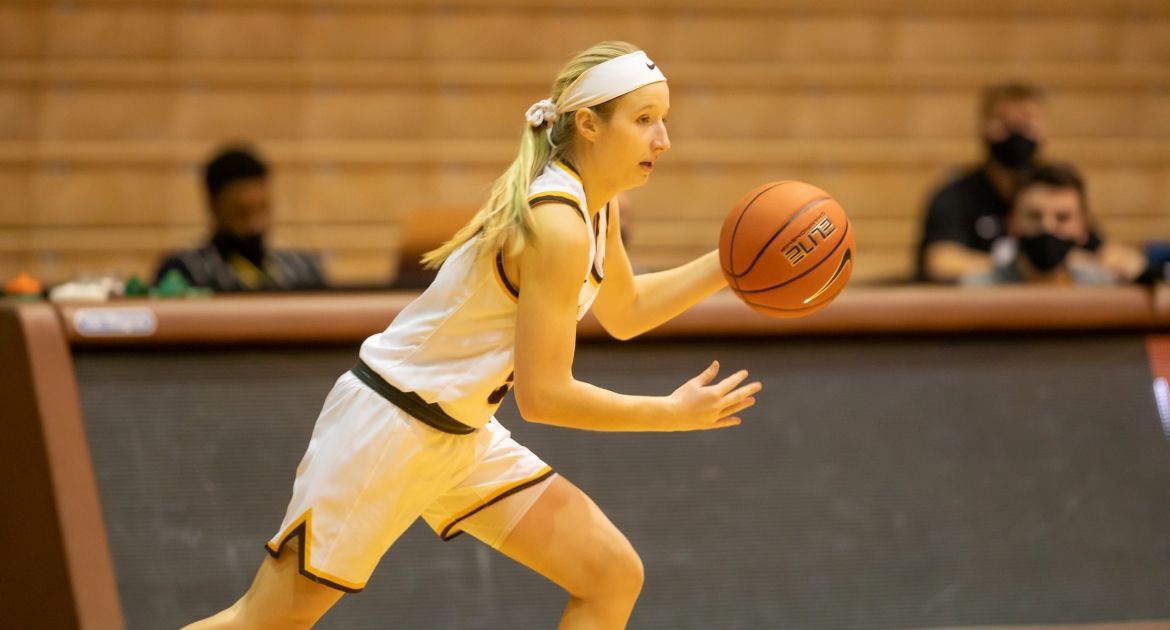 Led by a career-best effort from junior Shay Frederick (Greenville, Wis./Hortonville) in her return to her home state, the Valpo women’s basketball team rallied from a 10-point second-half deficit Sunday at Wisconsin to force overtime on a Frederick layup with 1.3 seconds to play in regulation, but the Badgers scored the first seven points of overtime as Valpo lost its nonconference finale, 89-82.

“I thought our players did a great job coming back in the second half. I thought we got off to a rough start on defense and were kind of battling ourselves to play our principles against their motion offense. I thought we settled in and did a better job in the second half of forcing tougher shots and rebounding the basketball. This team never gives up — they continue to fight with and for each other and they did a tremendous job clawing back into the game in the fourth quarter. Shay and Grace did a great job of creating shots for themselves and others. It was a really good team effort.”

“I think that Wisconsin has a better balance of shooters and players that can score at the rim, and that’s why today’s game was more of an offensive battle than our first two Big Ten games. I think they were able to stretch us out and get to the basket in the first half. I kept talking to our players and telling them that in order to win the game, we were going to have to get stops, and we just couldn’t find a way to do that consistently tonight. We have a great chance to learn from that when we get back from Christmas and improve our defense even more moving into Valley play.”

“Shay was great today! She played with an aggressive mentality the whole time she was on the floor, which was basically the whole game. She created for herself and her teammates, and most of all, she was great getting defensive rebounds in the second half, which was a big part of our ability to get back in the game. I am so happy that she was able to come back to Wisconsin and play, and only wish that her friends and family could have been in the stands to watch her performance.”

“I think that we are as prepared for Valley play as we can be in this shortened season. We have seen a variety of styles of play — both offensively and defensively — and have been in late-game situations. I think the players and coaches have learned a lot and will be ready to tip off Valley play in the new year. This team will continue to get back each game and learn and grow, and as always, our goal is to be playing our best basketball in Moline.”

Following a break for Christmas, Valpo (4-3) will open MVC play on Friday, January 1 with the first of back-to-back games at Illinois State. Tipoff is slated for 1 p.m.