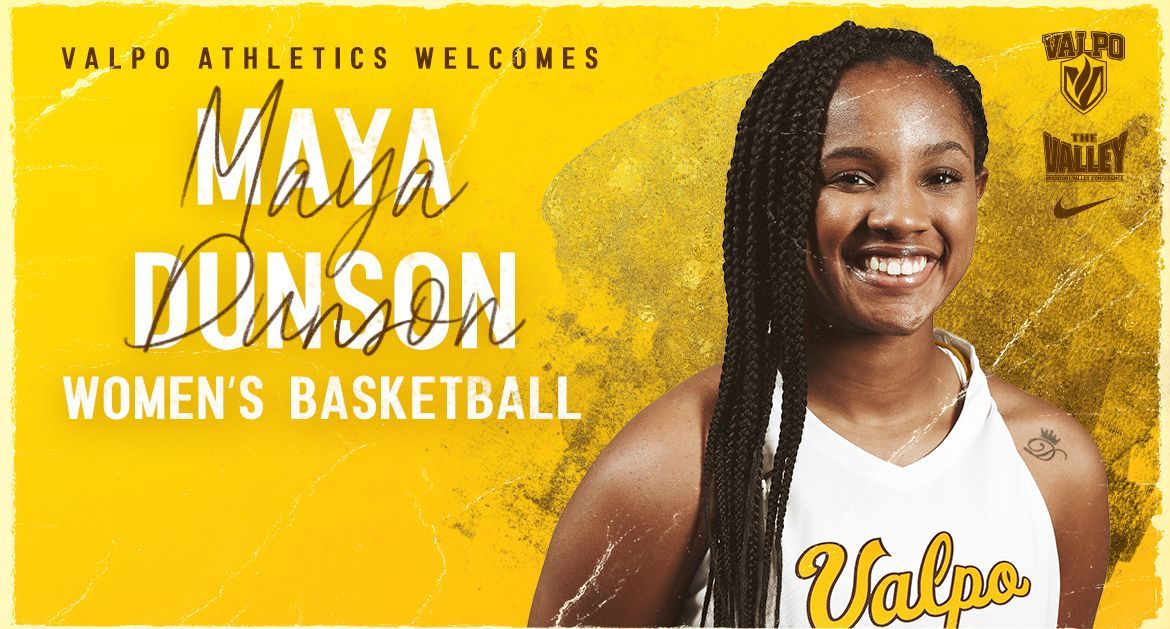 “I chose Valpo because I loved the overall atmosphere and nurturing environment that the coaches create,” Dunson said. “The coaching staff really cares for all of the players as people and really wants every single person on the team to succeed, both on and off the court. I also loved the coaching style and the program’s style of play — it seems that all of the players play free with tons of encouragement.”

Dunson comes to Valpo after playing one and a half seasons at Loyola. As a freshman in 2018-19, Dunson appeared in 26 games off the bench, averaging 4.2 points and 2.3 rebounds in 13.5 minutes per game of action. She scored in double figures three times in the season’s final four games, including back-to-back 13-point efforts in the MVC Tournament. Last season, Dunson averaged 2.2 points and 2.1 rebounds per game in 10 appearances, scoring six points apiece in wins over Chicago State and Bowling Green.

“I am really excited to have Maya joining our Valpo family,” Evans said. “She is a young woman that I had a chance to recruit while at Ohio University. Maya is a really mature young woman who is focused on becoming the best player, student and person that she can be. She has a tremendous ability to shoot the basketball and will give us another player who has college basketball experience. I am really excited to have two years with Maya and look forward to watching her have success on and off the court.”

Dunson played her prep basketball at Wayne [Ohio] H.S., also the home of recent women’s basketball signee Lovie Malone. While there, Dunson earned First Team All-League accolades and was an Honorable Mention All-District choice as a junior, averaging 9.8 points and 3.9 rebounds per game while connecting at a 40% clip from the 3-point line.

A three-year starter, she helped the Warriors to back-to-back undefeated conference campaigns and a 25-2 overall record as a sophomore, a year which saw her average 9.5 points, 5.5 rebounds and 3.9 assists per game and earn Second Team All-League accolades. On the travel circuit, Dunson was named an All-Star at the 2017 U.S. Junior Nationals while playing for Team Championship Behavior.

A standout in the classroom, Dunson received her bachelor’s degree in biology from Loyola University Chicago in December 2020, studying on the pre-med track with a focus on oncology. She was a member of the Dean’s List throughout her time at Loyola and received the St. Peter Faber Scholar Award in 2019. She will pursue a master’s degree in public health through Valpo’s College of Nursing and Health Professions, with plans to eventually attend medical school to become an oncologist and cancer epidemiologist.