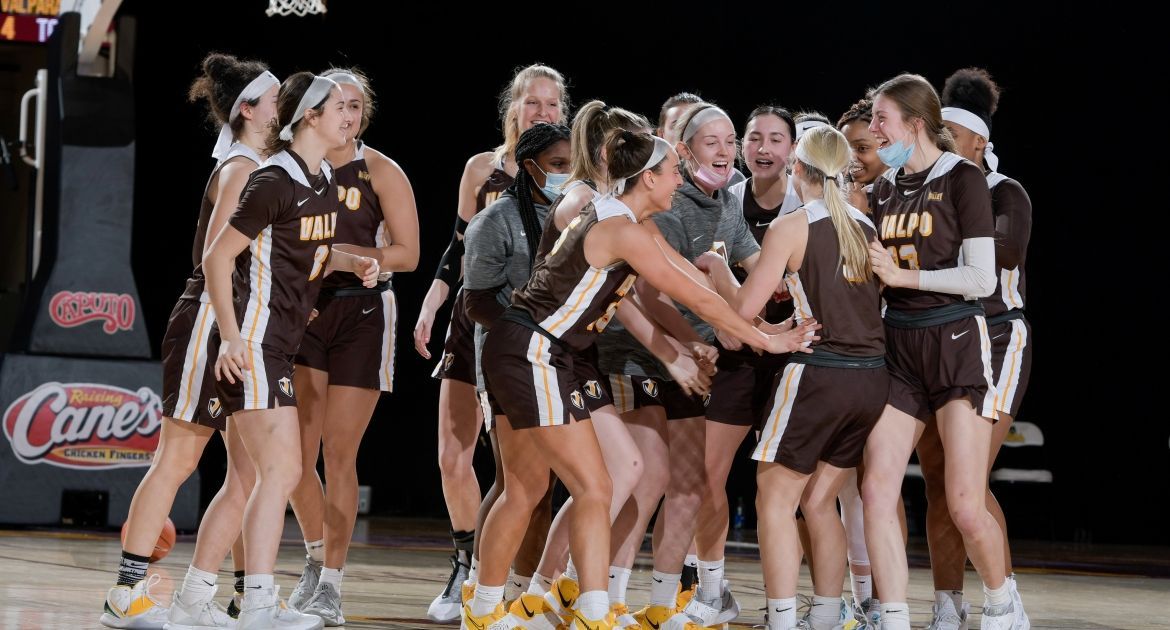 Shay Frederick gets mobbed by her teammates after scoring the game-winner Wednesday. (Mark Black)
Valparaiso at Loyola Chicago | February 24, 2021

Fans will be forgiven if they thought they were experiencing déjà vu while watching the closing seconds of the Valpo women’s basketball game against Loyola Wednesday evening from Chicago, as for the second time in as many years, junior Shay Frederick (Greenville, Wis./Hortonville) delivered a game-winning shot against the Ramblers as she converted a layup with 5.2 seconds to play to give Valpo the 57-55 victory.

“I’m happy we found a way to win — that was what we talked about at the half, was finding a way to get the win. It wasn’t our cleanest or our best game, but our players continued to fight and continued to scrap the entire night. They made plays down the stretch when we needed to have plays, and I’m proud of them for sticking with it.”

“The last play, we went to a play we run all the time. We try to slip someone to the rim and see if they can get open, and if not, we put the ball in Shay’s hands and let her make a play. We’re blessed to have a point guard who is very talented and very unselfish. We trust her to make great decisions in those moments, and that was a great decision.”

“Grace had a huge night for us. Coming off being a bit banged up, she was really aggressive today and really got us going on the offensive end.”

“We knew when we signed her Molly was a talented shooter. She’s come in to our program, she’s been mentally tough and has done a great job learning quickly. She made two big shots for us and defended well down the stretch also. I’ve been really pleased with what she's brought to the table.”

Valpo (9-10, 5-7 MVC) continues its five-game stretch on the road to conclude the regular season with its series this coming weekend at Southern Illinois. The games will be played Saturday and Sunday, Feb. 27 and 28, and will both tip at 4 p.m. Both will be broadcast live on ESPN3.