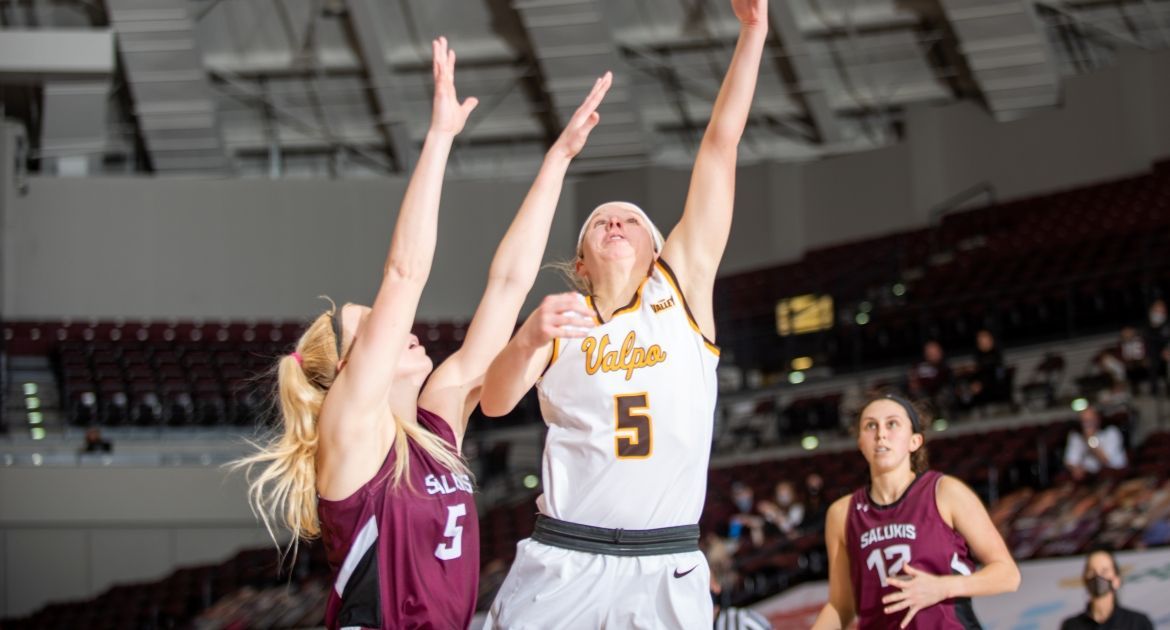 Shay Frederick led all players with 20 points on Sunday, including the game-tying basket with 11.7 seconds to play to send the game to overtime. (Will Becque)
Valparaiso at Southern Ill. | February 28, 2021

It might have looked completely different than Saturday’s victory, but the end result was the same Sunday for the Valpo women’s basketball team. Junior Shay Frederick (Greenville, Wis./Hortonville) tied the game at Southern Illinois with 11.7 seconds to play and Valpo out-scored the Salukis in the extra session 13-6 to earn a 70-63 win in Carbondale, Ill. and complete a road sweep of SIU. The win extended Valpo’s winning streak to four straight games, its longest within conference play since joining the MVC.

“I am really proud of the way this team stayed together tonight. We knew it was going to be a physical game and we couldn’t rely on shooting the ball as well as we did last night.”

“We got off to a rough start and were turning the ball over a lot in the first quarter and giving SIU easy baskets. I thought we settled down after that and took much better care of the ball and guarded SIU much better. Collectively, we did a great job on the boards tonight and limited them to just seven second-chance points. We talked a lot about toughness tonight — not just physical toughness, but mental toughness to stay the course and trust each other to do their jobs. I think we did that well after halftime.”

“We did a great job attacking the rim tonight and winning the points in the paint was huge for us tonight. We drove it really strong and did a great job finishing at the rim. We continued to share the ball and worked together to create space for each other to drive into.”

“Shay plays with a ton of composure and calmness, and I think that really helps her in late-game situations. The moment doesn’t seem to ever get too big for her, and her teammates do a great job of creating space and responding so that she can either finish or find the open player. I thought that she had a great weekend and was aggressive in attacking SIU both games.”

“We stayed together as a team in overtime tonight. Our players were great during the huddle in between regulation and overtime. Everyone was talking and encouraging each other to stay focused and to finish the job. They showed a lot of toughness and focused on getting stops and scores. I also think we did a great job limiting SIU to one shot in overtime and executing our offense. We took advantage of some matchups that we liked and were really attacking the basket.”

Valpo (11-10, 7-7 MVC) closes out the regular season next weekend with a pair of games at Drake. Friday’s series opener is slated for a 5 p.m. tip and can be seen live on The Valley on ESPN and heard live on WVUR (95.1 FM, Valparaiso).