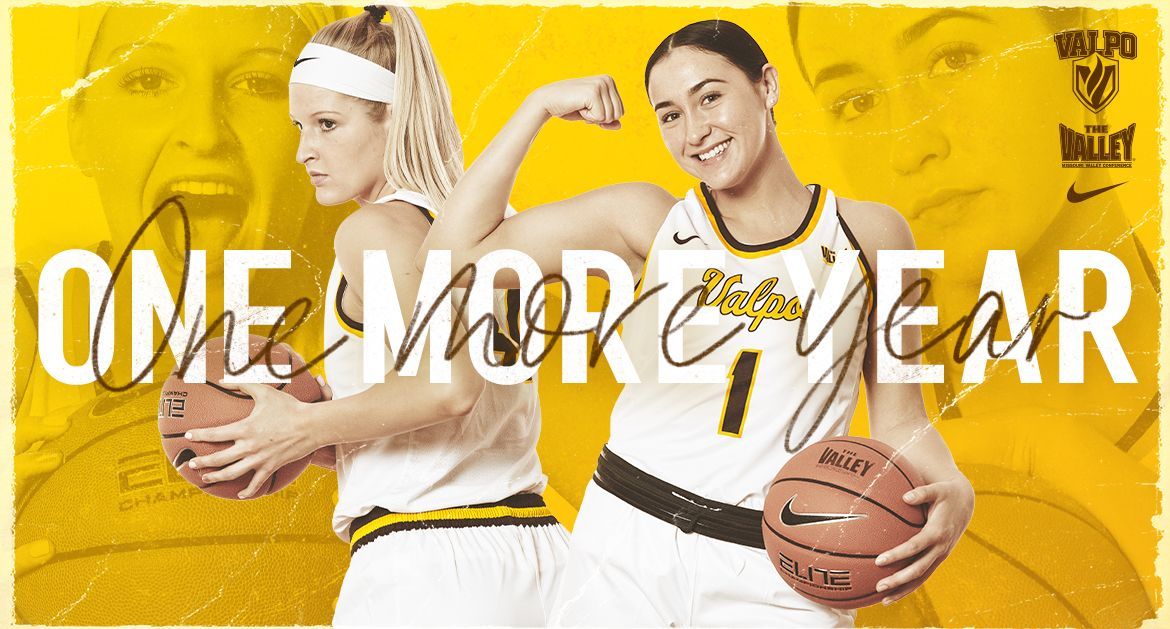 The Valpo women’s basketball program will have some more experience on its side when it takes the court for the 2021-22 season, as it announced Friday that seniors Caitlin Morrison (Glenview, Ill./Glenbrook South) and Grace White (Redby, Minn./Red Lake [Denver]) will utilize the additional season of eligibility granted by the NCAA to winter sport student-athletes due to the impact of the COVID-19 pandemic on the 2020-21 season.

“I am really excited to have both Caitlin and Grace returning to the program next season,” head coach Mary Evans said. “They both bring a wealth of experience within our program and will be tremendous leaders for our younger players. They both finally had the opportunity to go through a postseason with our staff, and I know they will both return better and more confident players for the 2021-22 season. I am really excited about this group of returning players and am looking forward to incorporating our three new players this summer and getting to work.”

For Morrison and for White, they took different paths to reach the decision to return and utilize the additional season of eligibility after the NCAA made its announcement in October. White’s decision was made in fairly short order.

“Of course, there were things to think about, but I knew that another year of education and playing basketball would be beneficial for my future career,” White said. “I had discussed with my coach and family if we would be given another year, and we were all up for it.”

Meanwhile, for Morrison, it was a slower process. Already in her fifth season at Valpo, Morrison opted to focus on the season at hand and leave the decision whether or not to return for the end of the year.

“I told Coach that it wasn't off the table and it was something I would consider, but I didn't get serious about it until the end of the season,” Morrison said. “Throughout the process, Coach Evans was very understanding and supportive, giving me as much time as I needed to make a decision. I had a lot of long talks with my family, coaches and mentors, and one thing that really stuck out to me was everyone saying ‘you will work for the next 40 years’ — that really swayed me towards using the extra season of eligibility. It seems like a great opportunity with no downside.”

Morrison also reflected back on the fact she’s been afforded a chance to play more basketball, an opportunity that others didn’t have.

“I am very thankful to be given this opportunity to continue to play the sport I love,” Morrison said. “It has been hard to see how some of my teammates have had basketball taken away from them, either due to career-ending injuries or due to COVID ending our season early in 2020 before we got the chance to play in the postseason.”

Both White and Morrison noted the growth — both in the team as a whole and in the individuals within the program — in their time under Coach Evans and her staff at Valpo, and both players look forward to contributing to the program’s continued upwards trajectory.

“We have been working extremely hard this offseason and I am excited for the returners and newcomers to do what has to be done next year,” White said. “I am excited to play ball with the group of girls we have and I think we will be a successful team next year. Our team has taken major steps towards getting to where we need to be, and next season, we have to walk the walk. We have to close the games that we would be winning in the third and early fourth quarter. We learned that we can beat any team in our conference and now we have to get the job done.”

“I really am looking forward to seeing us take that next step, to accomplish more than we did in previous seasons and to just see that continuous growth and improvement,” Morrison said. “As a team, I hope to make it to a postseason tournament and finish in the top half of the conference.”

Morrison has played in 112 games in the Brown and Gold since stepping on campus prior to the 2016-17 campaign. After redshirting in 2018-19 due to injury, she has enjoyed a pair of strong seasons playing under Coach Evans. Last season, Morrison started all 25 games and averaged 9.3 points/game. She ranked fifth in the MVC in blocked shots (26) and eighth in 3-pointers made (43). For her career to date, Morrison has totaled 692 points and 422 rebounds and ranks fourth in Valpo history with 107 career blocked shots.

Morrison already graduated from Valparaiso University with her bachelor’s degree in finance. She is currently working towards a master’s degree in international economics and finance, and will utilize the extra year to complete her work towards that degree.

White has seen action in 45 games in her two seasons since transferring to Valpo, starting all 22 of her appearances this past season. She averaged 11.1 points/game during the 2020-21 campaign, highlighted by a 17-point effort in the win at Illinois and a game-high 20 points in the victory at Purdue. White led Valpo in rebounding this past year, averaging 5.9 rebounds/game, and was also second on the team in assists (61), steals (46) and blocked shots (21). She ranked in the top-15 among MVC players in all five categories, including ranking fourth in the steals department.

White will graduate from Valparaiso University with her bachelor’s degree in psychology in May. She plans to use the extra year of education to begin her MBA.