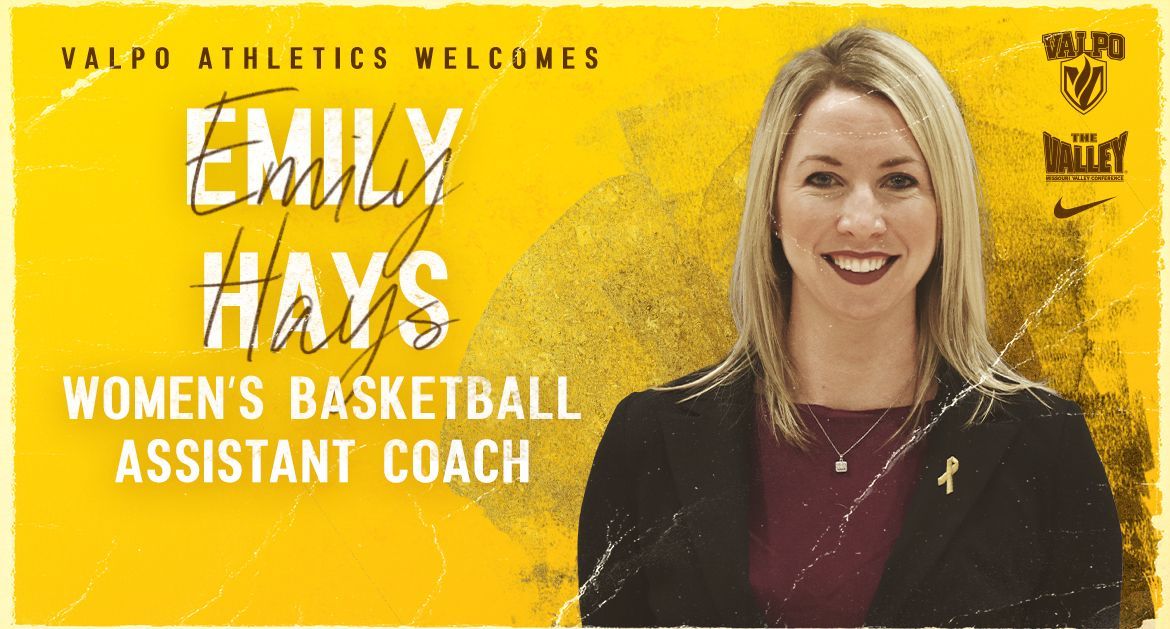 Valpo women’s basketball head coach Mary Evans announced today that Emily Hays has joined the program as an assistant coach. Hays comes to Valpo after spending the last seven years as a head coach, including the last four at Dickinson College.

“I am extremely excited to have Emily joining our women’s basketball program,” Evans said. “She brings our program a great deal of experience coaching at the collegiate level, which will lead to a seamless transition in mentoring our young women on and off the court. Throughout the interview process, it became clear to me that she is a tireless worker who care deeply about the young women that she has the opportunity to work with. Relationships are so important in our program and she will do a great job building and nurturing them with our current players and our future players.”

“I believe I align well with Coach Evans’ values and am excited about her vision for the program,” Hays said. “Valpo is a place where education is valued, and at the same time, you’ll have the opportunity to compete for a conference championship. Since Coach Evans has been at Valpo, the team has continued to improve each year, has had great wins and has proven to be a great shooting program!”

Under Hays’ guidance, Dickinson posted improved records in each of her three seasons, culminating with a 16-win campaign in 2019-20 which saw the Red Devils advance to the conference tournament semifinals. Dickinson did not compete in the 2020-21 season due to the COVID-19 pandemic.

In her three seasons, Hays coached four Red Devils players to a total of five All-Conference accolades, including a trio of honorees following the 2019-20 season. Kate Deutsch was named Centennial Conference Rookie of the Year and D3Hoops.com Mid-Atlantic Rookie of the Year for 2018-19 as well.

Prior to arriving at Dickinson, Hays served as head coach at Hiram College for three seasons. She led the Terriers to a school-record 17 wins in 2016-17 in her final season at the helm and saw the team surpass the program record for conference victories in each of her final two years.

“Being a head coach the past seven years will make me a better assistant,” Hays said. “I understand the ins and outs of building a successful program and know the grit and preparation it takes to win. Our team can expect me to bring my love of competition and be a support system in all aspects.”

Hays started her coaching career at her alma mater, Washington & Jefferson College, where she spent four seasons as an assistant coach. She helped guide the Presidents to consecutive 20-win campaigns in her final two years on staff in 2012-13 and 2013-14.

A 2009 graduate of Washington & Jefferson College, Hays was a three-time All-Conference selection on the hardwood and was Presidents Athletic Conference Player of the Year and a First Team All-Region honoree as a senior. During her playing career, the Presidents earned 89 victories and were ranked in the nation’s top-25 in three of her four seasons.