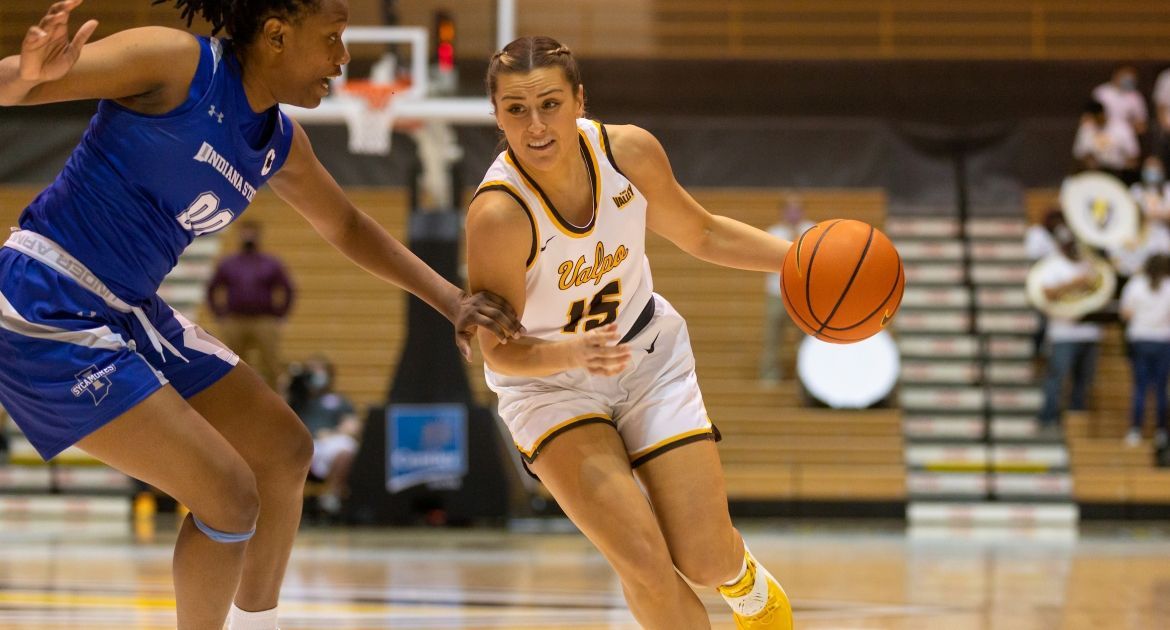 Next Up in Valpo Basketball: The Valpo women’s basketball team looks to rebound from Friday night’s defeat as it sets its sights on Sunday afternoon’s matchup with in-state foe Evansville. Please note that masks are required at all home Valpo athletic events until further notice.

Previously: Valpo placed four players in double figures Friday in its return to the ARC and enjoyed another strong performance shooting from deep, but the Beacons were unable to overcome a large advantage in the paint and on the glass from visiting Indiana State, as the Sycamores earned an 85-65 win.

Head Coach Mary Evans: Mary Evans is in her fourth year at the helm of the program in 2021-22 and owns a record of 42-62. Evans has made an immediate impact on the program in her first three years, raising the team’s level of play to be competitive in a strong Missouri Valley Conference. Evans’ preferred style of play has been a big part of the program’s turnaround, as Valpo has led the MVC in 3-pointers made per game and in steals per game in each of the last two seasons.

Series Notes: Valpo and Evansville have met 21 times in the all-time series, with Valpo owning a 12-9 advantage - including a 7-2 lead in the series since joining the MVC prior to the 2017-18 campaign. Last season, Valpo won two of the three matchups - Evansville claimed a 57-43 victory in the regular season series opener, Valpo came back the next night with a 71-56 win, and Valpo then claimed the rubber game at Hoops in the Heartland, downing the Purple Aces by a 65-52 final. Carie Weinman scored a career-best 28 points and tallied six steals in the tournament victory.

@ValpoWBB...
...and @ValleyHoops
- Valpo has been picked to finish in sixth place in the MVC preseason poll, totaling 208 points - just one point shy of fifth place.
- Valpo is in its fifth season as a member of the Missouri Valley Conference.
- The Valley was ranked seventh nationally in conference NET in 2020-21 and was eighth nationally in conference RPI in 2019-20.

...versus Indiana State
- Valpo trailed 16-14 entering the final minute of the opening quarter, but Grace White scored five points in the final 60 seconds to push the Beacons to a 19-18 edge at the end of the first period.
- The battle to gain the advantage continued into the second quarter, as there were five more lead changes in the first half of the stanza. Leah Earnest gave Valpo a 26-25 lead with 6:26 to play in the first half on a layup.
- The Beacons failed to hit from the field for the next six-plus minutes after that bucket, however, as the Sycamores went on a 12-1 run to pull ahead by double figures. A step-back 3-pointer by Shay Frederick in the final seconds of the half brought Valpo back within 37-29 at intermission.
- Valpo enjoyed a strong offensive third quarter, hitting 8-of-13 from the field, including 5-of-8 from 3-point range. But the Beacons were unable to close any closer than five points during the period, as Indiana State went 10-of-21 from the field and grabbed offensive boards on eight of its 11 misses. The Sycamores finished the third quarter with 12 second-chance points and outscored Valpo for the period, 26-23, to push their lead to 63-52 with 10 minutes to play.
- ISU went on a quick 7-0 spurt in the first 90 seconds of the fourth quarter to secure the win.
- As a team, Valpo assisted on 18 of its 21 baskets Friday night – its second-highest assist total of the year.
- The Beacons shot 12-of-30 (.400) from 3-point range in the defeat. This marks the fourth time in seven MVC games that Valpo has made at least 10 triples and has shot at least 40% from deep.
- Valpo committed just 14 turnovers, its lowest total since turning the ball over just 10 times in the MVC opener at Southern Illinois. It was the first time this season that Indiana State forced fewer than 15 turnovers.
- The Sycamores hit the glass hard, out-rebounding Valpo by a 41-20 margin. ISU grabbed 18 offensive boards and converted them into 26 second-chance points.
- Indiana State held a 40-point advantage in the paint, out-scoring the Beacons from the lane, 58-18.

...at Bradley
- Valpo never trailed in the first half and led by as many as eight points before the Braves cut the lead to 35-33 at intermission.
- Bradley scored the first basket of the second half 2:44 into the third quarter to take its first lead of the game, but Valpo outscored the Braves 18-5 the remainder of the quarter to lead 53-41 with 10 minutes to play.
- The Beacons’ lead was as many as 14 points in the fourth quarter and was still sitting at 13 approaching the halfway mark of the period, but Bradley scored 10 points in a four-possession stretch while holding Valpo without a point in that same span to close to within 58-55 with 3:09 to play.
- Caitlin Morrison connected on a huge 3-pointer on Valpo’s next possession to push the lead back to six points, allowing the Beacons to absorb back-to-back scoreless trips while Bradley scored on two of its next three possessions to close to within 61-59 with 1:32 remaining.
- Maya Dunson came up with a big bucket the next time down the floor, driving for a layup to again make it a two-possession game with 1:11 to go.
- It was Grace White with the key defensive play on the ensuing Bradley trip, blocking a 3-point attempt with less than a minute to play. And Valpo converted it into points on the other end, as Shay Frederick found Morrison for her fifth 3-pointer of the contest to put the game away.
- Morrison led four players in double figures with 15 points as she connected on 5-of-8 from the 3-point line. It was Morrison’s second time hitting at least five triples in Valpo’s last three games.
- White set a career high with six steals, while Leah Earnest posted the first double-double of her career with 11 points and 10 rebounds.

...looking ahead
- The Beacons have a light week next week, with just a single game at Loyola next Friday evening.

...at the ARC
- Friday is the fourth MVC home game of the season and the eighth of 13 home games in total this year for the Beacons.
- Valpo posted a 5-6 record at the ARC last season and is currently 3-4 at home this year.

@UEAthletics_WBB
- Evansville enters Sunday’s game at 7-9 overall this season, but just 1-4 in MVC action.
- The Purple Aces have dropped their last three games, including a 68-54 defeat Friday evening at Loyola.
- Abby Feit reached the 1,000-point milestone for her career last time out for the Purple Aces and is averaging a team-high 17.5 points/game to go with 9.9 rebounds/game.

Hitting From Deep
- Valpo connected on 12-of-30 from the 3-point line last time out against Indiana State, with six different players hitting at least one triple.
- It marked the seventh time this season that the Beacons have hit at least 10 3-pointers in a game, four of which have come in their seven MVC games to date.
- All four times they have hit 10+ 3-pointers in conference play, the Beacons have hit at least 40% of their tries from downtown.
- Valpo is now averaging an MVC-high 8.3 triples/game, good for 35th nationally.
- 42.5% of the Beacons’ points come via the 3-pointer, the third-highest percentage in the nation.

Rebounding - The Highs and the Lows
- While Valpo ranks last in the league in rebounding margin, it did enjoy one of its top rebounding games in recent history last weekend at Illinois State.
- The Beacons out-rebounded the Redbirds - who enjoy a positive rebounding margin on the season - by a 38-26 mark, just the second time this season they have held an advantage on the boards.
- The +12 mark on the glass was the program’s best under Mary Evans and its highest edge in the rebounding department since a +12 in a win at Loyola on Feb. 11, 2018.
- On the flip side, last time out Indiana State out-rebounded Valpo by a 41-20 margin - the -21 the second-worst on the glass by the Beacons this season.
- 18 of the Sycamores’ 41 boards came on the offensive glass.
- ISU converted those 18 offensive rebounds into 26 points, a season high for second-chance points by a Valpo opponent. In fact, over the four games prior to ISU, the Beacons had surrendered just 25 second-chance points combined.

Accomplishing Firsts
- Valpo has recorded a number of firsts in program history over the first few weekends of conference play.
- The Beacons’ win at Bradley was the program’s first over the Braves in Peoria.
- Bradley had previously won all six home games over Valpo.
- Valpo’s win over Drake was the first in program history over the Bulldogs.
- Drake previously owned a 13-0 advantage in the series, 11 of which had come since Valpo joined the Valley.
- That leaves Missouri State as the lone program the Beacons have yet to beat since joining the MVC.
- The win over Drake also gave Valpo its first sweep of the UNI/Drake weekend in MVC play.
- It is Valpo’s fourth sweep of a weekend set since joining the Valley. Valpo previously swept both the home and road Indiana State/Evansville weekends in 2019-20, and took down Southern Illinois twice on back-to-back days last season.

Liv Breaks Out
- Junior Olivia Brown has stood out for the Beacons within MVC play.
- In Valley games, Brown is averaging 12.0 ppg on 51.7% shooting from the field and 46.9% from 3-point range.
- This comes after Brown averaged just 2.5 ppg through non-conference action and hit a total of nine field goals in the first 11 games.
- Included among her efforts in conference play so far are four double-digit scoring performances, and she has led all players twice - with 21 points at Missouri State and with 18 points in the win over UNI.
- Brown was named MVC Newcomer of the Week on Jan. 10 for her performances in the victories over UNI and Drake - Valpo’s first MVC Newcomer of the Week since March 9, 2020.

Stellar Sophomore Season
- Sophomore Leah Earnest has taken multiple steps forward this year in her second collegiate season.
- After averaging just 3.4 points and 2.9 rebounds per game as a rookie, Earnest is averaging 9.2 points on 51.6% shooting (good for fifth in the Valley) and 4.7 rebounds per game this year.
- She has raised her game another level since the start of conference action, currently averaging 11.9 points and 6.6 rebounds per game in MVC play.
- Last weekend at Bradley, Earnest matched her career high with 10 rebounds and picked up the first double-double of her career, scoring 11 points for Valpo’s first double-double since Dec. 20, 2020.

Top 100 Wins
- Valpo has made a habit of knocking off top-100 opponents in MVC play over the last few seasons and has done so twice already this year.
- The win over UNI came over a team which entered that game ranked #46 in NET, followed by the win over a Drake squad which was ranked #65.
- It marks Valpo’s sixth and seventh top-100 NET/RPI wins in Valley action over the last three seasons.
- Prior to its Feb. 16, 2020 win at Illinois State - its first top-100 win in conference play since joining the Valley - Valpo had gone nearly seven years without a top-100 victory.