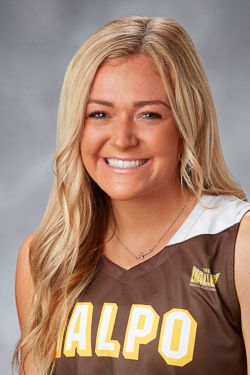 2018-19: Sat out due to an injury… Retained three seasons of eligibility.

2017-18: Appeared in 30 games and made 22 starts as a true freshman… Averaged 5.9 points, 1.5 rebounds and 3.2 assists per game, fourth in the conference… Ranked second in the conference with an assist to turnover ratio of 1.6… Had six points in her collegiate debut on Nov. 16 against IU Kokomo... Dished out six assists in the first road game of her career on Nov. 21 at Miami (Ohio)... Made her first career start on Nov. 25 against Grand Canyon and turned in eight points and seven assists... Had career highs in points (13) and assists (8) on Nov. 28 at Bowling Green, becoming the first Valpo player with eight or more assists and 10 or more points in a single game since Jessica Carr in 2015... Set new career highs in points (18), made field goals (6) and made 3-pointers (3) on Jan. 7 vs. Bradley... Had her fourth career double-figure scoring output on Jan. 12 vs. Loyola, scoring 12 points as one of five Valpo players in double figures against the Ramblers. That was her second straight game in double figures, the first time in her young collegiate career she had double figures in back-to-back contests. She also pulled down a career-high five rebounds in that game... Notched her third straight game in double figures with 11 points on Jan. 19 at Missouri State.

Prep: Named a 2016-17 Indiana All-Star, earning a place on the 13-player roster... Led South Bend St. Joseph to the 2016-17 Indiana Class 3A state title, averaging 14.4 points per game and 3.1 assists per game during her senior season... Helped the Indians finish her senior season with a 26-2 record... Scored nine points in the state championship game, a 57-49 win over North Harrison... Scored 12.5 points per game as a junior, helping the Indians to a semistate appearance... Started her prep career at LaPorte before transferring to South Bend St. Joseph... Other accomplishments include Indiana Junior All-Star, first-team Duneland Athletic Conference, first-team Northern Indiana conference, Northern Indiana Underclassmen of the Year, IBCA Subway Player of the Week, Burger King Outstanding Student-Athlete of the Month, IBCA Supreme 15 Underclassmen Team and all-tournament team at the TCU Lady Tiger Classic.

Personal: Parents are Debbie and Doug Konieczny... Has two brothers, J.R. and Chase... Born on Dec. 9, 1998... Is a rare Valpo basketball player to participate in Greek Life on campus as a Chi Omega... Member of Student-Athlete Advisory Committee... Majoring in business management.