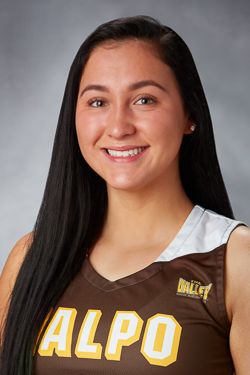 2019-20: Saw action in 23 games off the bench in her first season at Valpo, averaging 19.2 minutes/game ... posted 7.6 points and 4.2 rebounds per game ... ranked second on the team in rebounding ... connected at a 78.3% clip from the foul line, ranking 13th in the MVC ... scored in double figures on six occasions ... led Valpo in blocked shots six times, rebounds five times, steals four times, scoring three times and assists twice ... made Valpo debut Nov. 10 versus Ohio State with seven points and five rebounds in 22 minutes of action ... poured in a team-high 15 points at Northwestern Nov. 21 ... scored all six of her points in the final two minutes of regulation and overtime, including a 3-point play with 20 seconds to play in regulation to send the game to overtime, in Nov. 24 win over Bowling Green ... also led Valpo with eight rebounds against BGSU, a mark she would match the next time out as well at Toledo Nov. 27 ... tallied season-high four steals in win at Detroit Mercy Dec. 5 and tied that mark in win at Southern Illinois March 7 ... registered 11 points and six rebounds in Dec. 28 win over Chicago State ... had best game of the season in Dec. 30 win at Eastern Illinois ... set season highs across the board with 20 points (6-8 FG; 4-6 3PT; 4-4 FT), 10 rebounds and seven assists in the win ... led Valpo in both rebounds and assists in the win ... became first Valpo player to post a line of 20/10/7 or better since January 2008 ... scored 10 points and led Valpo with five rebounds in MVC opener versus Southern Illinois Jan. 3 ... knocked down a 3-pointer in the final minute of Valpo's epic come-from-behind win over Loyola Jan. 24 ... returned to action with four points and three rebounds at Loyola Feb. 22 after missing six games due to injury ... closed season with back-to-back strong efforts ... poured in team-high 18 points at #23/21 Missouri State March 5, including season-high seven made free throws (7-8), and also grabbed five rebounds ... followed two days later at SIU with team-high 16 points and the aforementioned four steals in season-ending win ... named MVC Newcomer of the Week March 9 for her efforts against MSU and SIU.

Prep: Won multiple letters in high school ... Scored over 2,400 career points… Played multiple positions during her prep career... Was named team MVP as a volleyball player... Played first base and shortstop in softball… Was a member of the National Honor Society and Student Council.

Personal: Daughter of Roger and Tara White ... Born on Oct. 27.. Two siblings are Aaron and Ashley… Majoring in psychology and communication and intends to earn both a bachelor’s and master’s degree… Was teammates with Valpo’s Carie Weinman at Denver… Comes from a Native American reservation and is the first person from her tribe to compete in Division-I athletics... Had a graduating class of 30.