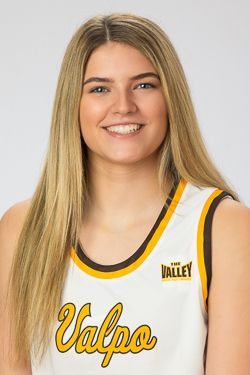 2020-21: Enrolled mid-year for spring 2021 semester ... saw action in nine games off the bench, playing 56 minutes ... averaged 1.7 points/game ... debuted with seven minutes of action Feb. 19 versus Evansville, scoring four points - including a 3-pointer - and tallying a rebound and a steal ... played 10 minutes the next night in win over the Purple Aces, hitting a 3-pointer and pulling down a rebound ... knocked down a pair of key 3-pointers in the second half of two-point win at Loyola Feb. 24 and also grabbed a season-high three rebounds ... registered an assist in Feb. 27 win at Southern Illinois ... had putback basket late in first half March 5 at Drake.

Prep: Played two seasons (2018-2020) at Benet Academy … was first player off the bench in 2019-20 for the Redwings, earning Honorable Mention All-Area honors as she averaged six points and four assists per game … shot 40% from 3-point range and 80% from the foul line … Benet Academy was one of the nation’s top teams, posting a 29-3 overall record and earning conference and regional titles … Redwings reached as high as #1 in the state and #14 nationally in 2019-20 … helped Benet Academic claim conference, regional and sectional championships and finish fourth in the state in 2018-19 … played 2017-18 season at Hinsdale Central, averaging team highs of 11 points and six assists per game … played AAU basketball for Truth Basketball/M14 Hoops ... completed high school graduation requirements early through work at Fusion Academy.