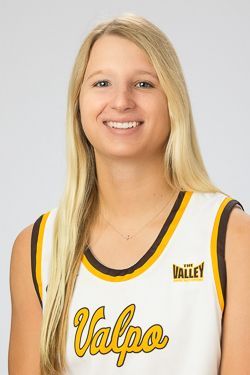 2020-21: Started all 25 games for Valpo, averaging a conference-high 36.1 minutes/game ... a First Team All-MVC selection ... led team, averaging 14.5 points/game and 4.7 assists/game ... led MVC in assists and ranked sixth in scoring ... finished third on team in rebounding (3.6/game) and steals (1.6/game) ... ranked third in the Valley in 3-pointers made (55), fourth in assist/TO ratio, fifth in 3-point percentage (.396) and sixth in steals ... ranked 36th nationally in total assists, 54th in assists/game, 47th in 3-point percentage and 62nd in 3-pointers made ... finished season sixth in program history in career free throw percentage (.789), seventh in assists (347) and 10th in 3-point percentage (.353) ... scored in double figures 19 times, including seven efforts of 20+ points ... handed out five or more assists 17 times ... led Valpo in assists in 18 games and in scoring in 11 games ... handed out six assists in Dec. 2 win at Illinois ... tied career high with eight assists to go with 13 points in win over Western Michigan Dec. 12 ... kicked off stretch of three straight 20+ point performances with then-career best 27 points in return to her home state of Wisconsin Dec. 20 ... set new career highs in FGM and 3PTM as she went 10-of-17 from the field, including 7-of-14 from the 3-point line ... seven triples in a game is tied for fourth in program history and is the most by a Valpo player since 2005 ... sent game to overtime with driving layup with 1.3 seconds to play in regulation ... also grabbed eight rebounds and dished out five assists against the Badgers ... opened conference play with 20 points, including a perfect 9-for-9 mark from the free throw line, seven rebounds and six assists in win over UNI Jan. 7 ... scored 13 of her points against the Panthers in the fourth quarter, including nine straight in a 74-second span midway through the period to give Valpo the lead for good ... outscored UNI 13-11 by herself over the final 10 minutes ... followed next night with 26 points and six assists against the Panthers ... scored 12 of her 15 points in the fourth quarter at Illinois State Jan. 14, including a game-tying 3-pointer with 6.3 seconds to play in regulation and two free throws with three seconds to go to send the game to overtime ... added seven assists as well ... went 11-of-12 from the foul line in 18-point effort in win over the Redbirds the next night ... hit four 3-pointers en route to 23 points against #RV/25 Missouri State Jan. 30 ... finished with 17 points (5-9 3PT) and five assists and tied a career high with nine rebounds in Feb. 4 win over Bradley ... after attempting just two shots in the first 39-plus minutes, took the biggest shot of the game in the Feb. 24 win at Loyola, finishing at the basket to give Valpo a two-point lead with 5.2 seconds to play ... set a Valpo record next time out at Southern Illinois Feb. 27, hitting all six of her 3-point attempts on her way to a career-high 28 points in win over the Salukis ... scored 17 of her points, including five triples, in the second quarter alone and outscored SIU 17-12 in the second 10 minutes ... finished with 20 points, a career high-tying nine rebounds and six assists the next night in overtime win over the Salukis ... forced overtime with a layup with 11.7 seconds to play, scored five points in the extra period and also grabbed an offensive rebound off her own missed free throw which led to two more points ... named College Sports Madness MVC Player of the Week March 1 for her performances against Loyola and SIU ... closed regular season with 23 points and five assists at Drake March 6 ... tallied a career-best seven steals - tied for ninth-most in a single game in program history - along with 14 points and seven assists in MVC Tournament opening win over Evansville March 11 ... named to the MVC Scholar-Athlete First Team.

2019-20: Started all 29 games as a sophomore for Valpo, averaging 10.0 points, 2.9 rebounds, 4.3 assists and 1.6 steals per game in 30.2 minutes/game of action ... led the team in assists, ranked second in steals and third in scoring ... handed out 126 total assists, 10th-most in a single season in program history ... already ranks 19th on Valpo's career assists chart after just two seasons ... ranked second in the MVC in assists, fourth in assist/TO ratio, seventh in free throw percentage (.811) and 10th in steals ... increased scoring average to 11.5 points/game within MVC-only play ... scored in double figures on 14 occasions ... led Valpo in assists 21 times, steals six times, scoring five times and rebounds five times ... tied for team-high honors with then-career best 21 points in overtime win over Bowling Green Nov. 24, scoring 13 of her 21 in the fourth quarter/overtime ... went 13-of-14 from the foul line in the win over the Falcons, the 13 made free throws tied for fifth-most in a single game in program history ... also handed out six assists in the win over BGSU ... dished out seven assists in Nov. 27 win at Toledo ... set career high by handing out eight assists in victory over Morehead State Dec. 17 ... recorded five steals against #21/19 Missouri State Jan. 5 ... posted 18 points, five assists and a career-high six steals in Jan. 12 win at Evansville ... tallied seven assists while committing just one turnover against Bradley Jan. 19 ... led epic comeback victory against Loyola Jan. 24 as Valpo erased 11-point deficit in final three minutes ... scored Valpo's last seven points in a span of 14.5 seconds - a layup with 19.7 to play, two free throws with 12.0 remaining and a 3-point play which gave Valpo the lead with 5.2 seconds left ... finished the win over the Ramblers with 21 points to tie her career high at that point, six rebounds and five assists ... averaged 7.7 assists/game over a three-game stretch Feb. 2-8, including matching her career best with eight assists in back-to-back wins over Evansville Feb. 6 and Indiana State Feb. 8 ... posted team-high 18 points Feb. 14 at Bradley ... set career high with 22 points in win over UNI Feb. 28, knocking down career-best eight field goals (8-16) while also tallying four assists without committing a turnover ... dished out game-high six assists to go with 15 points versus Drake March 1 ... helped Valpo close season with road win at Southern Illinois March 7 with eight points, a career-high nine rebounds and four assists.

2018-19: Became the first Valpo player to garner MVC All-Freshman Team honors and the first to do so in any conference since Meredith Hamlet was a member of the 2015-16 Horizon League All-Freshman Team… Was named the Female Newcomer of the Year in Valpo Athletics at the end-of-year ARC Awards, as voted on by her peers… Appeared in all 32 games and made 13 starts for Valpo, averaging 7.9 points and 2.3 rebounds in 29.4 minutes while totaling a team-high 106 assists against just 43 turnovers… Had 49 steals to rank second on the team… Ranked sixth in The Valley and first among freshmen with 3.3 assists per game… Ranked 13th in the conference and fourth among freshmen with 1.5 steals per game… Ranked second in the MVC and first among freshmen with a 2.0 assist to turnover ratio… Played the most minutes per game of any freshman in the conference… Had a strong showing in her collegiate debut on Nov. 7 at UIC, filling up the stat sheet with seven points, three steals and a team-high four assists...After scoring 10 points on Nov. 16 at Morehead State, finished in double figures for the third time in four games on Nov. 17 vs. St. Francis Brooklyn. She racked up career highs in points (19), assists (5), made 3s (4), made field goals (5) and made free throws (5) while committing just one turnover.... Became just the fourth Valpo player since the 2001-02 season to average double figures over the first five games of her freshman year by turning in 10.2 points per game through the first five games this season... Dished out a game-high six assists on Nov. 26 vs. Toledo, setting a career watermark... Went 5-of-7 from the field to score 12 points off the bench on Jan. 18 vs. Indiana State... Led all scorers on Jan. 27 at Missouri State with a 17-point performance that included a career-high six made field goals. She matched a personal best with four made triples while finishing two points shy of a career watermark... Made her first career start on Feb. 1 vs. Bradley and turned in career highs in points (21) and assists (8) while seeing 38 minutes of action... Swiped six steals on Feb. 8 vs. Drake, the most by a Valpo player in a single game since 2014... Had 15 points on Feb. 28 at Bradley, her highest scoring output since setting her career high in her first career start in the first meeting with the Braves.

Prep: Was a captain as a junior and senior... Four-year letter winner in basketball and one-year letter winner in softball… Thrived academically, earning honor roll all semesters of high school and finishing with a 3.9 GPA… Led Hortonville to its first state tournament final four appearance in 30 years as a junior and senior…Helped her team to back-to-back FVA conference championships as a freshman and sophomore… Won regional titles all four years and sectional championships in 2017 and 2018… Led the team in scoring and assists in each of her final three seasons… Fab Five (Preseason Top 5 Players for Northeast Wisconsin) as a sophomore, junior and senior… All-Area First-Team selection all four years… WBCA D2 All-State First Team as a junior and senior and honorable mention as a sophomore… Associated Press Third Team All-State as a senior and honorable mention as a junior… McDonald’s All-American nominee… Finished as the school’s all-time leader in scoring, assists, steals and 3-pointers (boys and girls)… Compiled 1,451 points, 403 assists, 205 steals and 282 made 3s… Averaged 16.7 points and 5.2 assists per game as a senior after scoring 16.5 points per contest as a junior… Voted the top shooter in the state of Wisconsin… Selected to play in the WBCA 2018 Senior All-Star Game… Earned the US Marine Corp Distinguished Athlete Award at Hortonville... First Team All-Conference (Fox Valley Association) all four years... Ranked sixth by WIS Sports for the Class of 2018.

Personal: Daughter of Jim and Colleen Frederick… Majoring in business marketing with a minor in sports management.