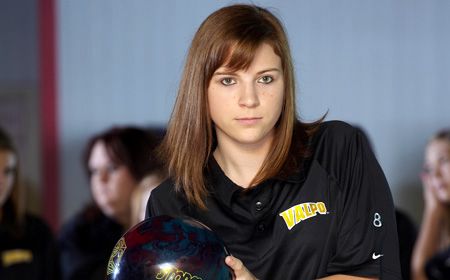 The #20 Valparaiso bowling team earned a pair of wins in its five matches in action Sunday at the Greater Ozark Invitational in Springfield, Mo., including a victory over preseason #1 and defending national champion Nebraska, as the Crusaders closed out their first tournament with a sixth-place finish in the ten-team field that included eight ranked squads.

“Overall, I was pleased with how we carried ourselves in our first tournament,” said Crusader head coach Stephen Anthony.  “This tournament field was very strong, and to come out of the last two days 5-5 with a sixth-place finish shows that we have a team that’s going to be competitive at the highest level.  I’m especially proud of how we conducted ourselves over this weekend and the way we worked together as a team.  For our first tournament, we learned a number of lessons on how to fight through close games, and I’m looking forward to continuing to build as a team and preparing for our next tournament.”

The Crusaders opened action on Sunday, which consisted of all best-of-seven baker matches, in a seeding-round match against Stephen F. Austin.  Valpo opened the match with a 202-158 victory, and after SFA took the next two games, captured game four by a 219-170 count to knot the match up at two games apiece.  But the Ladyjacks took the final two games of the match to earn a 4-2 victory.

Valpo then faced off against #12 Minnesota State-Mankato, taking game two 165-148 to tie things up at one game each.  Mankato earned wins in each of the next two games before the Crusaders bowled their best game of the day, putting a 225 on the board in game five to close to within 3-2.  But Mankato responded with a 196-161 win in game six to take the match, four games to two.

The tournament then moved into the bracket round to determine the final placements and the Crusaders drew the tall task of facing the top-ranked and defending national champion Cornhuskers in their first match of the bracket round.  Valpo got out to a quick start against Nebraska, earning 159-140 and 180-172 wins in each of the first two games.  Nebraska rallied back with a narrow 177-174 win in game three, but Valpo returned the favor with a 198-144 win in game four to go up 3-1.  The Cornhuskers responded with a 181-176 victory in game five, and a 211-159 Nebraska win in game six sent the match to a decisive game seven.  The Crusaders took the finale with one of their best efforts of the day, however, rolling a 213 to win by 42 pins and advance.

#14 Southern University was the next opponent on the slate for Valpo, and after the Crusaders earned a 195-187 victory in the opener, Southern took the next three games to go ahead 3-1.  But Valpo captured a narrow 177-175 decision in game five, propelling itself to the come-from-behind victory with 189-154 and 168-154 wins in games six and seven, respectively.  The win sent the Crusaders into the fifth-place match in a rematch from earlier in the day against Mankato, but Valpo was never able to gain the upper hand, as Mankato earned a 4-2 victory.

“Today, I was pleased with how we fought through early adversity,” said Anthony.  “After losing our first two matches, we got paired against #1 Nebraska and were in position to win in five.  We missed out on an opportunity to finish them in five and Nebraska pushed us to seven, but I was happy with how we found a way to win game seven.  Then against Southern, being down 3-1 and being able to rally for the win was another good sign for us as a team.  We bowled really well in our final match as well, but just couldn’t get ahead at any point.  Overall, I’m pleased with how we performed today, especially how we battled in our two wins.”

Valparaiso (9-5) returns to action in two Thursdays, traveling to Lincoln, Neb. on November 5 for the first of three days of competition at the Big Red Invitational, hosted by Nebraska.