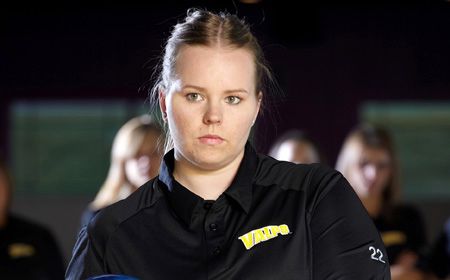 The Valparaiso bowling team completed its second day of competition at the Big Red Invitational in Lincoln, Neb. on Friday afternoon and enters Saturday in fourth place in the eight-team field.

Valpo has totaled 7,447 pins through two days of action to enter the final day in fourth place.  Central Missouri (7,869 pins) leads the pace, while Nebraska and Arkansas State both are ahead of the Crusaders as well.

“We had a competitive day today maintaining our position in the tournament,” said Crusader head coach Stephen Anthony.  “I was pleased with how we battled through some tough frames to beat Minnesota State and how we scored well against Vanderbilt.  A few frames cost us against Nebraska, but we are learning and growing as a team every time out.  We are in position to finish in a good spot with a strong performance tomorrow, so hopefully we can learn from today and finish the tournament with a strong third day.”

Valparaiso kicked off the day against Arkansas State, falling to the Red Wolves 973-906 despite a Crusader-best game of the day from Busiel, who posted a 233 in the opener.  The Crusaders rebounded with an 894-863 win over Prairie View A&M, led by a 216 from Amanda Cortese and a 201 from Natalie Cortese.

Valpo followed with another victory over Minnesota State-Mankato in the middle match of the day, coming up with an 822-787 victory.  The Crusaders then fell to Vanderbilt despite their high game of the day, losing 999-949, led by a 212 from Natalie Cortese.  Valpo closed Friday’s action against host Nebraska, dropping a tight 896-876 battle.