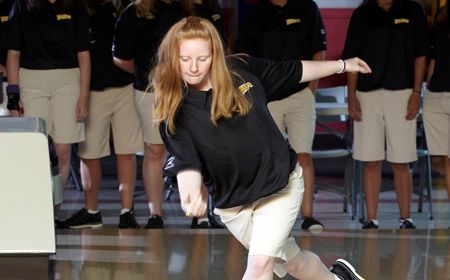 The #11 Valparaiso bowling squad went 4-1 Saturday on the first of two days of competition at the Warhawk Classic in Whitewater, Wis., and are just seven pins out of first place.

The Crusaders totaled 4,048 pins on Saturday, which featured three four-game baker matches and two traditional matches.  Elmhurst, which also went 4-1 on Saturday, is the only team ahead of Valpo, a scant seven pins up on the Crusaders.

The day started with the four-game baker matches, and Valpo came up with a dramatic victory in the opener, defeating host #14 UW-Whitewater, 703-698, thanks to a 179-143 advantage in game four.  The Crusaders fell to #14 Minnesota St.-Mankato 707-640 in their next match, but closed baker play with a 733-700 win over Elmhurst after posting their best baker game of the day (207) in the final game of the match.

The move to the traditional matches did not face the Crusaders, who closed the day with two more wins.  Valpo easily downed Mankato, 1022-911, led by games of 237 from Krystyna Johnson (Montgomery, Ill./Oswego East [Delaware State]) and 220 by Nicole Hamilton (Plainfield, Ill./Plainfield South).  The Crusaders then ended Saturday’s competition with a 950-846 wins over the hosts, paced by a 223 from Johnson, who leads all bowlers in average after day one.

“Today was a solid day for us from start to finish,” said Crusader head coach Stephen Anthony.  “Except for one baker game, I felt we did a nice job of staying focused and filling frames.  I was also pleased with how we completed the day by posting two solid scores in the team games.  The challenge will obviously be to continue tomorrow, but to sit just seven pins out of first with a 4-1 record puts us in a good position for us to reach our goals for the weekend.”

Valparaiso (58-37) closes out action at the two-day classic in Whitewater on Sunday morning beginning at 9:35 a.m.