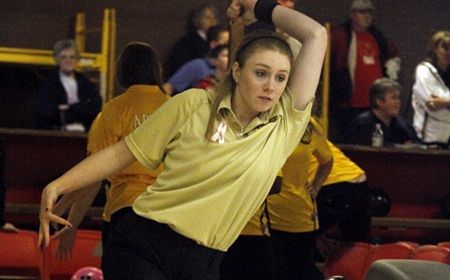 A 4-1 record on Saturday, including a victory over #3 Nebraska, has the #11 Valparaiso bowling team alone in first place after the second of three days of competition of the Crusader Classic at the Stardust Bowl II in Merrillville.

Valpo is now 6-3 over the tournament's first two days, one-half game ahead of the Huskers in the tournament standings.  #17 Minnesota State-Mankato is 5-4, while #6 Arkansas State enters Sunday at 4-4.  #14 UW-Whitewater is 4-5 through two days, while Adrian (3-5) and Elmhurst (3-6) round out the tournament field.

“I am very excited about the opportunity to possibly bowl for the title in our home event,” said Crusader head coach Shon Washington.  “However, I know it will not be an easy task defeating last season's national runner-up on consecutive days to reach the finals.  I feel the team is really beginning to come together.  They've shown in recent tournaments an ability to break down a pattern as a team, which can give us an advantage over our opponents.”

The Crusaders kicked off Saturday's action, contested in the traditional team format, against Elmhurst, and while only Jessica Guertin (Milford, Mich./Milford [Fairleigh Dickinson]), who rolled a 221, broke 200 in the opener, Valpo still opened with a 936-890 victory.  Guertin also broke 200 in the second match of the day, rolling a 203, and was joined by Natalie Cortese (Hoffman Estates, Ill./Hoffman Estates [Central Missouri]), who registered a 209, but it was not enough as the Crusaders fell to Mankato by a 1038-949 count.

Cortese exploded for a 248 in the third match of the day, while Krystyna Johnson (Montgomery, Ill./Oswego East [Delaware State]) posted a 213 and Nicole Sanhamel (Vernon Hills, Ill./Vernon Hills) recorded a 211 as Valpo posted its highest score of Saturday's action in a 991-899 win over Whitewater.  Then came the win over the third-ranked Huskers, a 953-933 triumph led by a 233 from Sanhamel, a 212 by Cortese and a 206 from Jill Larson (Merrillville, Ind./Merrillville).  Cortese broke 200 for the fourth straight match in the day's finale, rolling a 207, while sister Amanda Cortese (Hoffman Estates, Ill./Hoffman Estates [Central Missouri]) posted a 201 game to help the Crusaders to an 895-827 win over Adrian to close Saturday's action.

Natalie Cortese led all bowlers Saturday with a 213.6 average over Valpo's five traditional matches.  Sanhamel rolled in four of Valpo's five contests and didn't fall below a 183, averaging a 204.3 on the day, third-best among all bowlers who competed in at least three matches.

Valparaiso (13-9) looks to earn the title at the Crusader Classic on Sunday in the last of three days of competition.  Action from Stardust Bowl II is slated to begin at 8:30 a.m.