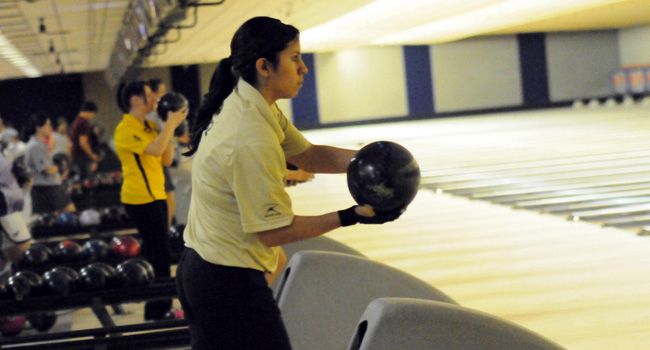 The #18 Valparaiso bowling team remained undefeated in 2011-2012 Saturday afternoon, winning five more matches to start the season 10-0 and set a new program record for most consecutive victories as the team competed at the Greater Ozark Invitational in Springfield, Mo.

“Today was another exciting day because we were able to go undefeated yet again,” said Crusader head coach Matt Nantais.  “The girls have risen to the occasion in every match.  A few times, we struggled, but they pulled together as a team and got through it.  The team is excited to bowl tomorrow for the chance at a possible tournament championship.”

The Crusaders began the day taking on #13 Stephen F. Austin and easily defeated the Ladyjacks by a 992-820 score, led by games of 235 from sophomore Kaity Galka (Dyer, Ind./Lake Central) and 203 from Amanda Cortese.  Valpo then took two straight matches from #20 Prairie View A&M by scores of 916-812 and 945-828.  In the first match, the Crusaders were paced by a 226 by Amanda Cortese and a 225 from Natalie Cortese, while Busiel led the way in the second meeting with a 224.

For the second straight day, Valpo faced off against host #4 Central Missouri, and for the second straight day, it was the Crusaders who came out victorious, this time by a 949-875 score.  Redshirt freshman Alyssa Alvarez (Antioch, Ill./Antioch) paced Valpo against UCM with a score of 201.  Finally, the Crusaders closed the day with an 885-834 win over Louisiana Tech, led by a 218 game from Natalie Cortese as five different bowlers led Valpo over the day’s five matches.

Valparaiso (10-0) currently sits in second in the eight-team field in the tournament standings with 9,385 total pins.  The Crusaders enter bracket play tomorrow needing to win as few as two matches to earn the tournament championship.  Sunday’s bowling begins at 8:30 a.m.