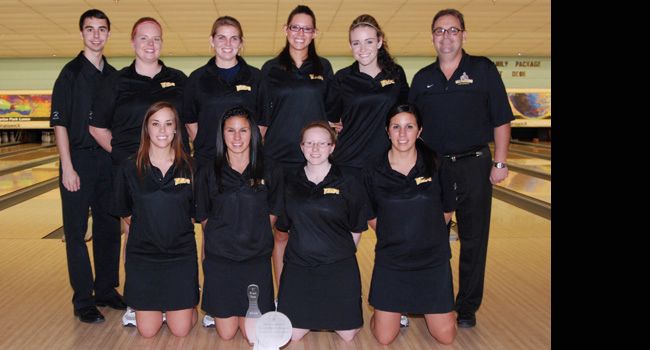 The #18 Valparaiso bowling team won its season-opening tournament on Sunday, downing Arkansas State in the championship match of the Greater Ozark Invitational in Springfield, Mo., four games to one.  The championship was the first official tournament title in Crusader program history.

The Crusaders had previously topped a tournament field in their first season at UW-Whitewater, but since that event featured just four teams, it did not count as an official tournament championship.  The field this weekend featured eight squads, including three of the nation’s top-seven teams as ranked in the NTCA preseason poll.

The Crusaders’ road to the championship became a bit tougher after the first match, contested in best-of-seven baker format, of Sunday morning, as Valpo dropped its first match of the year to #6 Arkansas State, which was the top seed entering bracket play.  The Crusaders used back-to-back games of 206 and 224 to go up 3-2 on ASU, but dropped a 12-pin decision in game six and also lost game seven as the Red Wolves earned a 4-3 win.

Facing off against #7 Sam Houston State, the Crusaders needed a win to advance to the championship match, and responded with the program’s best performance ever in baker play.  Valpo averaged a 217.8 over the five matches and didn’t bowl a game under 200 in the 4-1 victory over SHSU.  The Crusaders started the matchup with a 257 and won the first three games.  SHSU earned a 225-200 victory in game four to extend the match, but Valpo responded with a 202-192 win to advance to the championship contest.

Valpo earned a rematch with Arkansas State for the tournament title and took control from the start, earning a tight 185-183 victory in the opener.  Games of 221 and 209 helped give the Crusaders a 3-0 lead before the Red Wolves took game four to force a fifth game.  But Valpo broke 200 for the eighth time over its last 10 games, defeating Arkansas State 203-181 to earn the tournament championship, four games to one.

Valparaiso (12-1) will return home to host the Crusader Classic in two weekends on Nov. 11-13 at Stardust Bowl II in Merrillville.