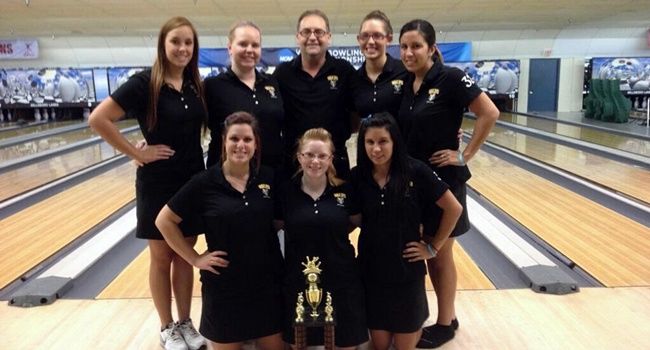 The Crusaders pose with the third-place trophy from the Hawk Classic.
Related Links

In a 19-team field featuring 10 of the nation’s top-12 ranked teams, it was #18 Valparaiso which won a pair of matches over top-five squads, including a victory over the nation’s top-ranked team, on Sunday to secure a third-place finish.

The Crusaders entered the bracket round as the fourth seed and were matched up against third-seeded host Maryland Eastern Shore, which was ranked #1 in the NTCA preseason poll, in the opener on Sunday.  But the host Hawks proved to be too much for Valpo in the opener, winning the match four games to one in the best-of-seven baker format.

Next up on the docket for the Crusaders was #4 Central Missouri, and for the third time in as many matchups against the Jennies this season, it was Valpo which earned the victory, downing UCM by a 4-2 score.  The win over Central Missouri set the Crusaders up for a rematch against Maryland Eastern Shore, the nation’s top-ranked team, in the third-place match, and this time it would be Valpo coming out on top with a 4-3 victory.  The win was the third for the Crusaders in their three years of program history over the top-ranked team in the country.

Valparaiso (30-8) has finished no worse than third place in each of its first three tournaments of the 2011-2012 campaign, and will now take a break for the holidays.  The Crusaders return to the lanes on Jan. 13-15 at the Mid-Winter Invitational in Jonesboro, Ark., hosted by Arkansas State.