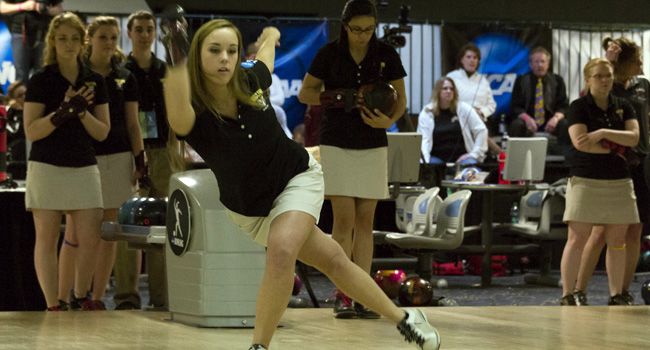 The #9 Valparaiso bowling team closed out play in its home tournament, the Crusader Classic at Inman's, on Sunday, finishing in sixth place in the ten-team field.

The Crusaders bookended the day with a pair of tight matches against #4 Vanderbilt, neither of which fell Valpo's way. The opener against the Commodores saw Valpo bowl games of 222 and 212 to jump out to a 2-0 lead in the best-of-seven baker format, but Vandy answered with two straight wins, including a narrow 227-224 decision in game four. Valpo moved within one game of the win with a tight 187-185 victory in game five, but despite breaking 200 in each of the last two games, Vandy earned the 4-3 win.

Valpo rolled to a 4-1 win over Elmhurst in its second match of the day. The Crusaders dropped the opening game, 192-170, but rebounded with four straight wins to capture the match. The victory was capped by a game of 227 in the finale, the team's highest baker score of the day.

The win over Elmhurst set up a rematch with Vanderbilt in the fifth-place match. The teams split the first four games before the Commodores earned a commanding 248-148 win in game five to move within one game of the win. The squads tied at 203 in game six, however, keeping the Crusaders alive, and a 219-201 win in game seven meant the match was split 3-3-1. The modified baker tiebreaker (in which each team rolls the equivalent of frames 6-10) went Vanderbilt's way, though, by a score of 106-97.

Valparaiso (8-10) continues its season next weekend at the UMES Hawk Classic. The three-day event starts on Friday, Nov. 16 in Millsboro, Del.