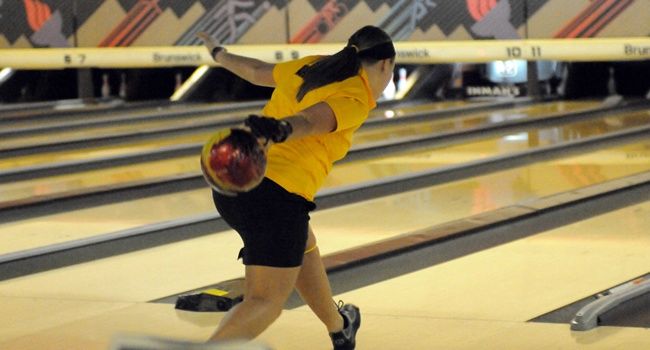 Raychel Wolever and the Crusaders are in eighth place after day one. (Ray Acevedo)
Related Links

In a field which features eight of the nation’s top-10 teams and 13 top-20 squads in all, #9 Valparaiso ended day one of the UMES Hawk Classic in Millsboro, Del. in eighth place on Friday.

The Crusaders totaled 3,777 pins through their five matches on Friday, just 53 pins out of seventh place and only 119 pins outside the top-five.  Host Maryland Eastern Shore holds the team lead with 4,275 pins, narrowly outpacing Fairleigh Dickinson (4,247 pins).

Valpo kicked off action on Friday, contested in the four-game baker format, against #15 Adelphi, but could not earn an opening win, dropping pins in each of the first three games en route to a 792-778 defeat.  Next up for the Crusaders was #RV Monmouth, and Valpo responded with a win, out-scoring Monmouth in each of the four games in a 771-683 victory.

Valparaiso (10-13) continues action at the three-day tournament with traditional team play on Saturday.