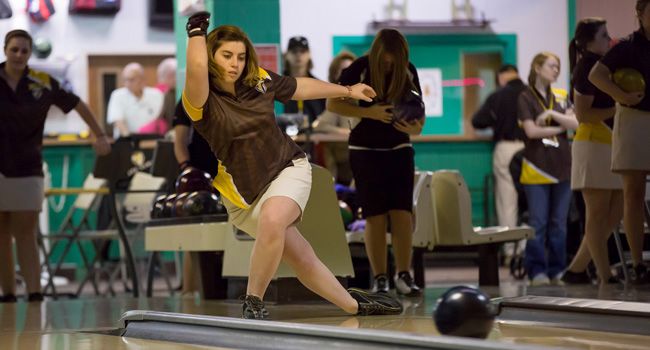 Despite wins over two of the nation's top-three teams on Saturday, #14 Valparaiso was unable to move up the standings at the Prairie View A&M Invitational in Arlington, Texas, closing the second day of action in seventh place.

The Crusaders ended the day with a cumulative pinfall through two days of 8,268 pins, good for seventh place among the 12 competing teams and just 56 pins shy of sixth position. Arkansas State, the nation's top-ranked program, topped the team standings with 9,026 pins.

Valpo opened Saturday's action, contested in the traditional team format, against Jackson State, but despite games of 214 from senior Torrie Decker (Van Wert, Ohio/Van Wert [Robert Morris (Ill.)]) and 206 from sophomore Raychel Wolever (Charlotte, Mich./Charlotte), the Crusaders suffered a narrow 915-910 defeat in the opener. Valpo then fell to #6 Nebraska, 953-909, with freshman Carly Larson (Merrillville, Ind./Merrillville) pacing the Crusaders in that match with a 206 game.

The Crusaders would down a couple of the nation's highest-ranked teams in their next two matches, however. First, Valpo took down #2 Maryland Eastern Shore by a single pin, 880-879, led by a 215 game by Decker and a 205 game from junior Sadie Jasinski (Franklin, Wis./Franklin). Jasinski again broke 200 in the next match, finishing with a team-high game of 214 in a 907-865 victory over #3 Central Missouri. Valpo was unable to close out the day on a winning streak, however, as despite games of 212 by Wolever and 200 by Decker, the Crusaders dropped the finale, 1000-957, to #RV Norfolk State.