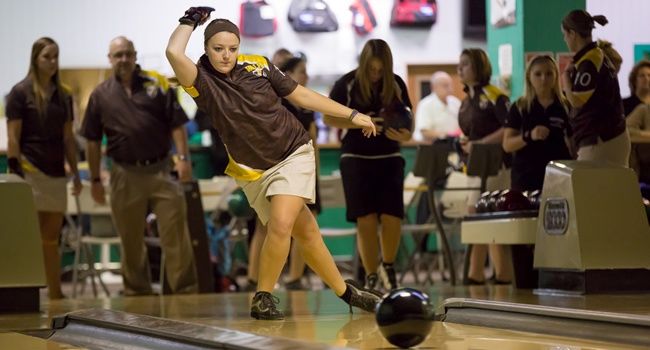 Raychel Wolever and the Crusaders closed out the Track Kat Klash on Sunday.
Related Links

A third straight winning day, including one of the top four-game baker matches in program history, closed out competition at the Track Kat Klash in Huntsville, Texas for #14 Valparaiso on Sunday.

The Crusaders placed ninth out of the 19 competing teams on Sunday with a pinfall of 3,847 pins, just 48 pins behind seventh place. The three days were scored separately, with Valpo placing ninth, fifth and ninth each of the three days. Had the tournament standings been cumulative for all three days, the Crusaders would have finished in seventh position.

Valpo opened Sunday's play with a loss to Southern, falling behind after the opening game and never taking the lead in a 713-675 defeat. The Crusaders rebounded against host #7 Sam Houston State however, opening with a game of 221 to take a 50-pin lead and never relinquishing the advantage in an 806-773 victory.

Valpo then posted its fifth-best score all time in a four-game baker match for a victory against #RV Prairie View A&M, easily downing the Panthers 838-661. The Crusaders recorded games of 196, 234, 165 and 243 in the win.

Despite an opening 212 to earn an early 45-pin lead over #6 Stephen F. Austin, the Crusaders ended up falling 810-739. Valpo closed the tournament with its second-largest victory in a four-game baker match in program history, earning a 789-480 win over Grambling, finishing things off with a game of 240.

Valparaiso (49-49) takes next weekend off before returning to the lanes at the Central Missouri Invitational in North Kansas City, Mo. The three-day event begins Friday, Feb. 28.