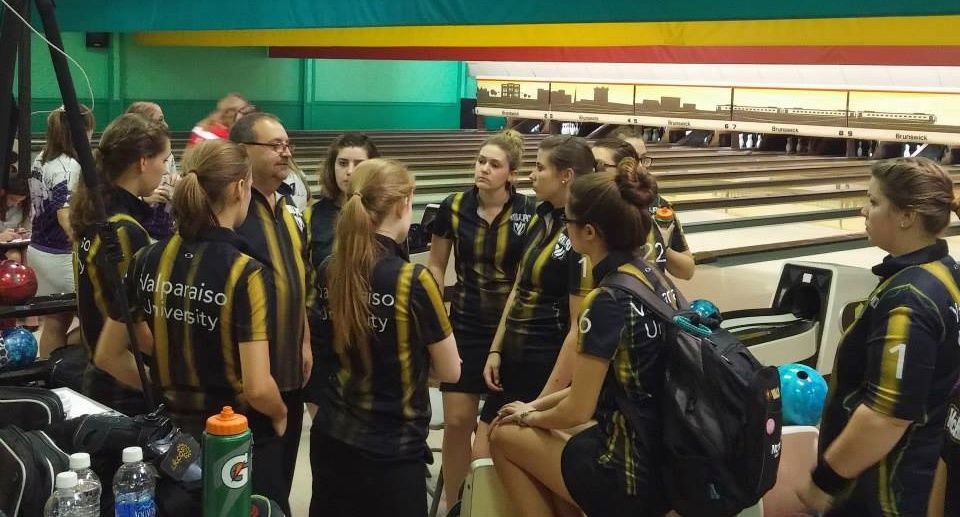 The Crusaders prior to the start of the opening day of competition.

The #15 Valparaiso bowling team opened up hosting of the sixth annual Crusader Classic at Inman’s on Friday, splitting its six matches on the first day of competition.

#8 UW-Whitewater leads the team standings after day one, toppling 6,095 pins in the first six matches.  The Warhawks narrowly beat out #1 Nebraska (6,012 pins) for the top spot entering Saturday.  Valpo totaled 5,419 pins through its six matches, just 15 pins back of #RV Tulane for ninth place.

It was a rough start to the day, contested in the five-game baker format, for the Crusaders on Friday.  Valpo opened up against #16 McKendree, fell behind by 61 pins after the first game and was unable to gain any ground from there, dropping a 990-930 decision.  The Crusaders rebounded in their second match, defeating #20 Monmouth 877-791 as they bested the Hawks in four of the five games.

Valpo followed with its second straight victory, jumping out to a 43-pin edge over #RV Tulane after two games and holding on for a 920-907 win.  The winning streak would not extend to three straight matches, however, as Alma led by 54 pins after two games.  While the Crusaders used a 190 game three to slice the deficit to just two pints, they were unable to take the lead, falling by an 878-855 final.

The Crusaders’ best performance of the day came in their fifth match as they took down #2 Arkansas State, 936-830.  Just the third win in program history over a team ranked second nationally, Valpo bested 180 in each of the final four games, including a 211 in game two, and out-scored the Red Wolves in all five games.  The day would end on a down note for Valpo, though, as #4 Vanderbilt led by 63 pins after one game en route to a 991-901 final.

“We didn’t bowl as well as I hoped today – we left a lot out there, but finishing with a 3-3 record is not a bad way to start,” said Crusader head coach Matt Nantais.  “We lost a couple close matches not finishing at the end of the matches, but we had a big win against Arkansas State – never an easy team to beat.  Our schedule doesn’t get any easier this weekend – tomorrow’s going to be another very tough day, but we are going to make some adjustments and see how we do.  We had some people step up today to showcase our depth – both Katherine Sulaitis and Kelsey Fader bowled very well today.”

Valparaiso (13-7) returns to action on Saturday morning at Inman’s as it hosts the second day of competition.  The set of six traditional matches is slated to begin at 9:25 a.m.