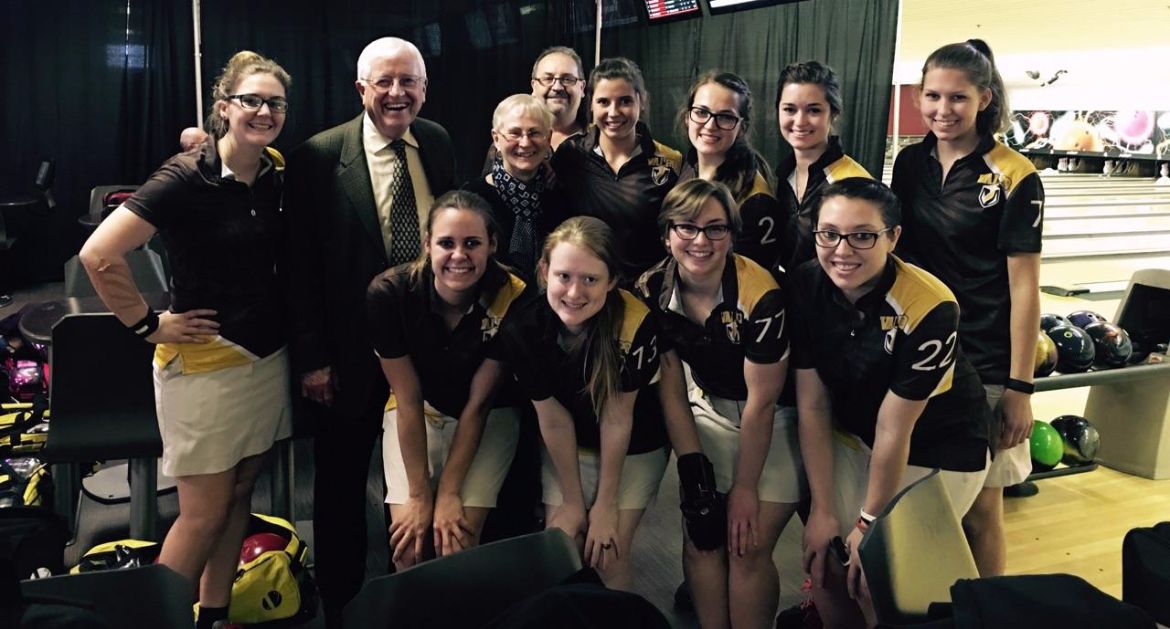 The Crusaders with former Valparaiso University president Alan Harre and his wife, Diane, on Saturday

The Crusaders went 1-5 in six traditional team matches on Friday, placing seventh out of the eight teams with 5,470 total pins. #1 Nebraska took home the crown on day two of the competition, as the tournament is split into three separate one-day events.

“Today was a rough day for us on the lanes,” said Crusader head coach Matt Nantais. “But on a positive note, we were able to visit with the Harres [former Valparaiso University president, Alan, and his wife, Diane] today – they are our biggest supporters and always make sure to come out when we bowl at Nebraska.”

Valpo went toe-to-toe with #2 Arkansas State to start the day, but fell 928-925 despite a game of 203 from senior Kelsey Fader (New Baltimore, Mich./Anchor Bay). The Crusaders dropped a 996-889 decision to #6 Sam Houston State in their second match, led by a 215 game by sophomore Aubree Trexler (Arcadia, Ind./Hamilton Heights).

A third different Crusader cracked 200 in their third match of the day, as senior Katherine Sulaitis (St. Charles, Ill./East) posted a 212 effort as Valpo lost 1003-909 to #9 McKendree. Sulaitis would pace Valpo in its next match as well, rolling a 223 game, while Fader added a 201 game, but it wouldn’t be enough to down #7 UW-Whitewater, as the Crusaders fell 1022-872.

Valpo was unable to overcome host and top-ranked Nebraska in its next match, dropping a 1010-879 decision. The Crusaders would end the day on a winning note with a 996-702 victory over Lincoln, led by a 233 from Fader and a 222 by freshman Kendra Tryniski (Fulton, N.Y./Fulton).

“We started off the day bowling very well against Arkansas State, but lost the match in the 10th frame, which seemed to be the story of the day,” said Nantais. “We couldn’t take advantage of other people’s mistakes, and it hurt us in the win/loss column today. Tomorrow, we bowl four more matches, and our goal is to bowl one frame at a time and have each of us do our job. With each day being a separate tournament, we have a goal of coming out tomorrow and winning Saturday’s tournament.”

Valparaiso (14-21) closes out the Big Red Invitational on Saturday.