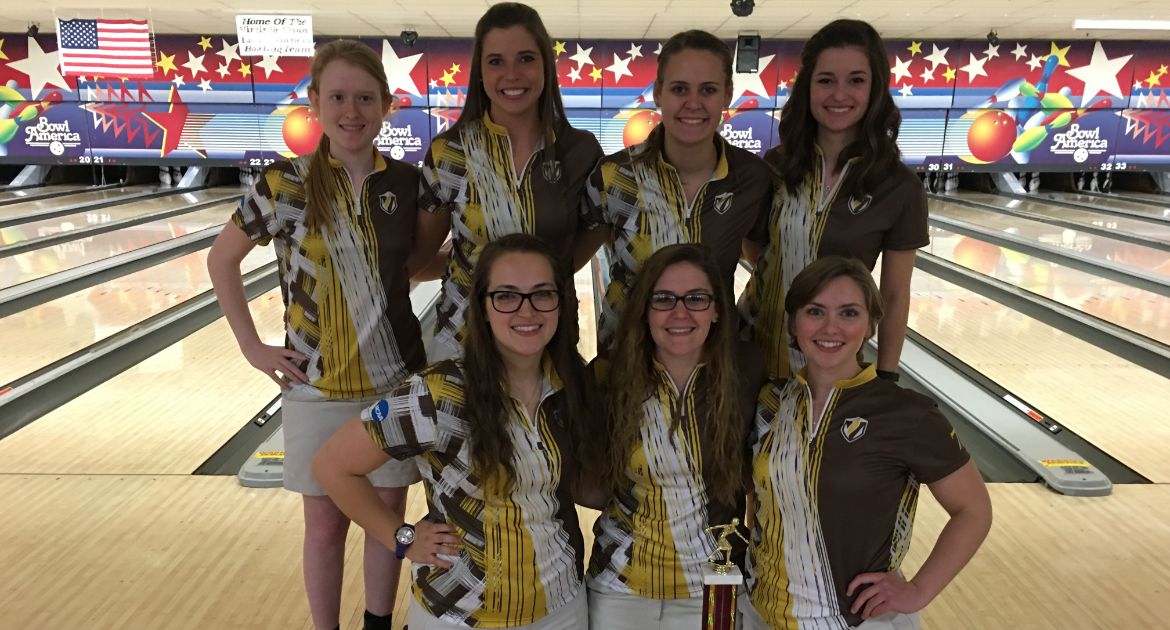 The Crusaders with the tournament trophy following their victory.

The #17 Valparaiso University bowling team earned its fourth event victory in program history, closing out a perfect weekend with a pair of victories in bracket play Sunday to capture the team championship at the Virginia Union Invitational in Midlothian, Va.

With a perfect 10-0 record through the first two days of competition, Valpo opened bracket play as the top seed, taking on second-seeded Bowie State. Valpo used a 201 game in the opener to take a 1-0 lead in the best-of-seven baker match, but Bowie State captured wins in games two and three to go ahead 2-1. The Crusaders were undeterred though, evening the match with a game four win and then posting a 192 in game five to go up 3-2. A 163 in the sixth game would be enough to get the job done, as Valpo advanced to the championship match.

“We started out sluggish today in going six games with Bowie,” said Crusader head coach Matt Nantais. “They are a team that never gives up, and gave us all we could handle the first match. We had a bye after that match, and during that time, we worked on some things we had issues with in the first match.”

The Crusaders had a bye into the title match, as their opponent was determined in the next round of bracket play. Facing Felician, Valpo used a 188 game to gain the early edge, and then edged Felician 189-185 in game two to pull ahead 2-0. A 204 effort in game three would move the Crusaders to the brink of the tournament title, and while Felician took game four, Valpo closed with its best effort of the day, rolling a 228 in the tournament-clinching game.

“The match against Felician, we came out well and took the first three games,” said Nantais. “We had some bad shots that allowed them to take the fourth game, but in the fifth game, we had a clean game – a great way to end the tournament.”

After four tournaments in as many weekends, Valparaiso (27-24) will be off from competition until after the New Year. The Crusaders return to competition at Arkansas State’s Mid-Winter Invitational, held January 15-17.

“I was extremely proud of the way the team represented Valpo on and off the lanes this weekend,” said Nantais. “It will be nice to have some time off after competing for the last four weekends.”