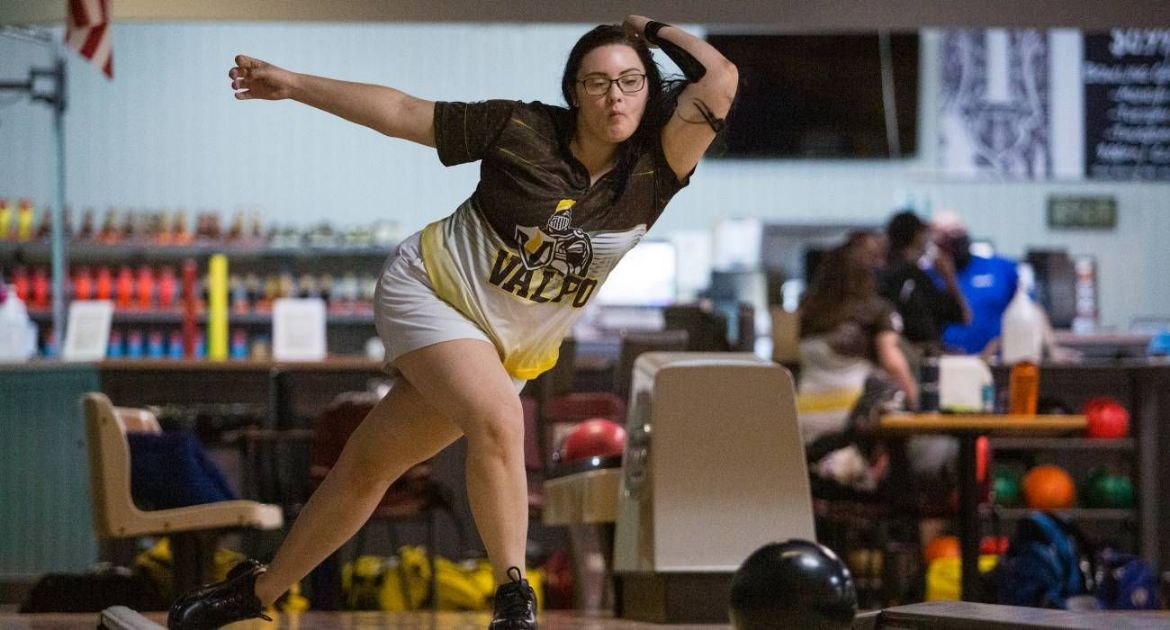 A rally from a 3-1-1 deficit helped propel the Valpo bowling team to back-to-back victories to close out the Bearcat Hammer Open on Sunday in Fairview Heights, Ill. The pair of victories placed Valpo fifth in the final bracket.

-        The first match of the day closed out the set of six total traditional team matches for the tournament. Lewis bested Valpo in the opener, 913-749, with sophomore Alexis Roof (Flint, Mich./Kearsley) providing Valpo’s high game in the contest with a 182.

-        The loss to Lewis placed Valpo in a matchup with Drury to open bracket play, contested in the best-of-seven baker format. The two squads split the first two games before tying in the third game, but the Panthers won the next two to take a 3-1-1 lead and move within one game of the match win.

-        The Brown and Gold edged out Drury in the sixth game, 197-195, and then forced a tiebreaker with a 210-160 win in game seven. In the tiebreaker, a five-frame modified baker game, it was all Valpo, completing the comeback with a 108-69 victory to advance on the winner’s side of the bracket.

-        The win over Drury sent Valpo into a rematch with Lewis to finish out the tournament. The first half of the match went Valpo’s way, as the Brown and Gold won the first three games by a combined 24 pins, but the Flyers rallied with wins in the next three to force a seventh game. Valpo finished out the win to close the weekend by topping Lewis, 198-162, in game seven – a result which secured a fifth-place tournament finish.

-        Valpo’s 7-6 record for the weekend marked its best record in a season-opening tournament since going 7-3 hosting the Crusader Challenge to open the 2016-17 campaign.

-        Valpo went to a modified baker tiebreaker to determine a victor for the seventh time in program history. The Brown and Gold are now 4-3 in those tiebreakers, but this was the first time it had come out winners in a tiebreaker at the end of a best-of-seven baker match (1-3).

-        Freshman Addy Bates (Cedar Park, Texas/Cedar Park) finished with a 187.3 average for the weekend, good for 10th position out of the bowlers who started all six traditional matches. Fellow freshman Kaylee Hodson (Auburn, N.Y./Auburn) posted a 191 average in her four starts, ranking eighth among bowlers who started four or more traditional matches.

Valpo (7-6) hosts the Crusader Classic at Stardust Bowl II in Merrillville next weekend. The three-day event begins Friday morning, Oct. 30 at 11 a.m. No fans will be allowed admittance into the bowling center for the tournament.