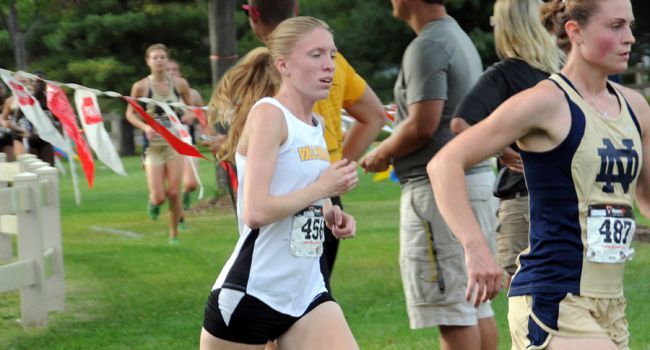 Richardson has been named the Horizon League Runner of the Week three times in two-plus seasons at Valparaiso (Fred Villarruel video).

By the time many of us have hit the snooze button twice before staggering back onto the hamster wheel that Monday morning represents, Jessica Richardson will have run more than a half marathon. Sixteen miles to be exact.

Starting this summer, the junior has followed an insane regimen that has her running 70 miles per week. The number is astounding even to those who schedule daily appointments with the treadmill. For those who run only when "fire" is yelled, hamstrings immediately cramp.

(Her work week is chronicled in the accompanying video.)

Her military-like training came as no surprise to cross-country head coach Mike Straubel.

"She is a dedicated runner who knows that it takes a lot of miles to be really good. We talked about what she needed to do to get better and she was more than eager to (put the work in). We built to 70 a week carefully over the summer and actually over her career. We are progressing in her training in order to move up the ladder," Straubel said.

Richardson has played the lead role on Straubel's squad since her arrival to Valparaiso just over two years ago. The Crusaders have participated in sixteen meets since the fall of 2011. Richardson has led the Brown and Gold in fourteen of them and checked in at second place in the other two. She holds two of the three fastest 6K times in Valpo history. Richardson has competed three times in the Notre Dame Invitational, two of which produced top ten all-time 5K times.

Straubel, the longest-tenured coach at Valparaiso, emits a great deal of pride when asked about Richardson's character and leadership abilities.

"When you have someone who works that hard and does all the right things, it motivates a coach to do even better to respect and honor the hard work of the team member. I feel an obligation to elevate my coaching to be worthy of her effort," Straubel said.

The respect for Richardson extends beyond Porter County. The Horizon League has named her Runner of the Week on three separate occasions. Her most recent honor came after stopping the clock at 23:29.84 on New York's 6,100-meter Van Coutland Park course, one of the most strenuous and demanding tracks in the United States.

The aspect of long-distance running that often gets overlooked is the mental resolve required. The heightened level of commitment necessary to compete - and succeed - on the Division I stage has no room for shortcuts.

"The truly good runners are mentally tough and that toughness manifests itself in many ways. It is what gets you out the door in the summer to run the big miles when there is no coach telling you to run. It is what keeps you going when your body is telling you that it wants to stop. Jessica is mentally one of the toughest I have had," Straubel continued.

Her passion for the open road began as a freshman at Columbus North High School.

"Our coach, Rick Weinheimer, was really passionate about the sport. When I started training under him, he really pushed me to do my best. He was all about having a positive attitude. He was very inspiring and it made me want to start working really hard," Richardson recalled.

The Horizon League Championships are held this Saturday at Youngstown State. A fourth-place overall finish at last year's HL Championships provides ample motivation for a podium finish this season. The top three finishers from the 2012 race were Loyola Ramblers, now residents of the Missouri Valley Conference. Richardson remains cautiously optimistic about this weekend's meet.

"My goal is to improve on last year's result, but I know there are a lot of very good runners in the League," Richardson remarked.

There is no true offseason, as the conclusion of the cross-country schedule backs up into the track and field preseason. It only makes sense that Richardson runs distance - the 10K - for the Crusaders in the spring. Admittedly, she prefers the nuances that various cross-country courses pose (elevation, conditions, etc.), but track presents a unique challenge.

"Track is fun in that it's all about pacing. I like the differences," Richardson noted.

While her work ethic on the trail sounds similar to a storyline out of a Tom Hanks film, Richardson is no Gump in the classroom.

Her 3.925 grade point average is perhaps the only figure more impressive than her on-course times. As if majoring in economics alone wasn't enough, Richardson decided at the end of last spring that a second major in mathematics and a minor in business were obtainable. She has been named to the Dean's List all four semesters (Fall 2011-Spring 2013). She also earned Presidential Academic Honors for the 2012-2013 academic year, her first eligible term.

As easy as schooling comes to her, graduate school would seem to be a logical next venture. But with Richardson's knowledge comes wisdom.

"Maybe one day if someone wants to pay me to go to school, I'd go back. Right now, I'm just looking to go straight into the workforce," Richardson said with a grin.

She mentioned financial advising as a potential career. If she so chooses that path, Jessica Richardson's combination of mathematical acumen and discipline will prepare her clients for the long road ahead.