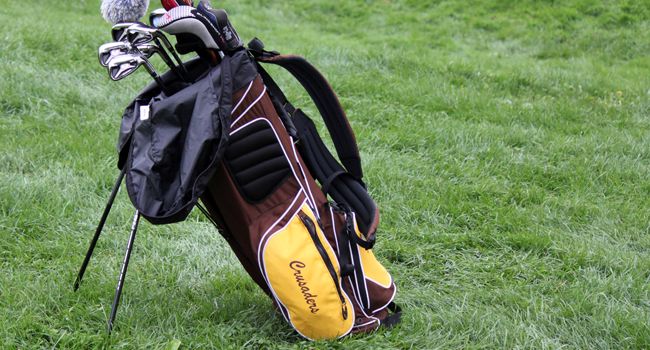 The Crusaders improved by 16 shots on Monday.
Related Links

The Valparaiso women's golf team improved by 16 shots over its opening-round performance as the Crusaders played the middle 18 holes of the Golfweek Program Challenge Monday at the Caledonia Fish & Golf Club in Myrtle Beach, S.C.

The Crusaders shot a 307 as a team on Monday, improving by 16 strokes over their opening-round 323 from Sunday. Valpo enters the tournament's final day in 11th place out of the 12 competing teams, six shots out of tenth place.

Four of the Crusaders' five golfers improved by at least three strokes on Monday from their first-round performance, led by senior Michelle Kleckner (New Brighton, Minn./Irondale), who shot a three-over-par 74 on Monday and will enter the final round in 29th place with a score of 151. Sophomore Sibil Gill (Kokomo, Ind./Western) and senior Kelly Voigt (Palatine, Ill./Fremd) enter the final round in a tie for 43rd position at 158 after rounds of 76 and 77, respectively, on Monday.

Freshman Angie Kim (Schaumburg, Ill./Fremd) improved by eight shots in her second collegiate round, posting a round of 80 to sit in 52nd place with a 168 score through two rounds. Fellow rookie Sydney Shrum (Cloverdale, Ind./Cloverdale) sits one shot behind Kim at 169 in 53rd position following a round of 86 on Monday.

Valparaiso will close out the season-opening tournament on Tuesday with the final 18 holes of the 54-hole event.