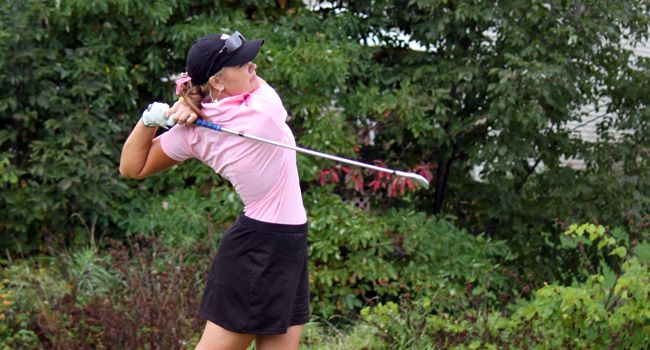 Erika Pfaender leads the SIUE DoubleTree Invitational after the opening round.
Related Links

Senior Erika Pfaender (Pewaukee, Wis./Arrowhead) opened the SIUE DoubleTree Invitational with a tournament-best round of 76, leading the Valparaiso women's golf team as the Crusaders are tied for second place after 18 of 36 holes at Sunset Hills G.C. in Edwardsville, Ill.

The Crusaders posted a team score of 324 in the tournament's opening round on Monday, tying Valpo for second position with Nebraska-Omaha. Lipscomb leads the team standings at the halfway point, shooting an opening-round 321.

Pfaender led the 60-player field on Monday, going out in 39 before shooting a 37 coming in to post a round of four-over 76, clear by two shots over second place. The senior is looking for the first tournament victory of her career.

Senior Michelle Kleckner (New Brighton, Minn./Irondale) was Valpo's second-lowest scorer on Monday, shooting an 81 in the opening round to enter Tuesday in a tie for 11th place. Sophomore Sibil Gill (Kokomo, Ind./Western) was one shot back of Kleckner, with her 82 putting her in a tie for 13th. Senior Brianna Davy (Schererville, Ind./Lake Central) is tied for 24th position after one round after shooting an 85, while freshman Angie Kim (Schaumburg, Ill./Fremd) is in a tie for 31st following an opening-round 87.

Valparaiso looks to claim the team title on Tuesday, as the tournament concludes with the final 18 holes.