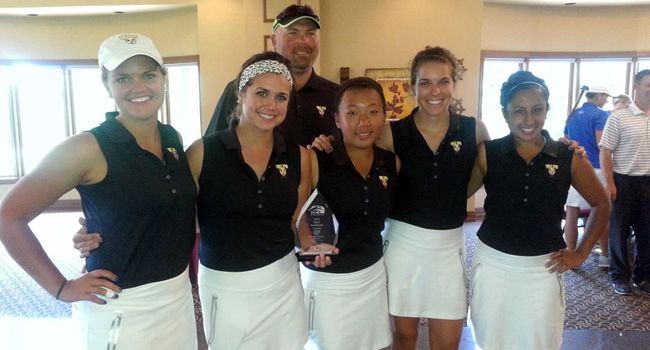 The Valparaiso women's golf program claimed a tournament championship for the second time in program history on Tuesday, earning the title at the SIUE DoubleTree Invitational in Edwardsville, Ill. at Sunset Hills C.C. by three strokes over Lipscomb. All five Crusaders finished among the top-20 golfers in the 60-person field.

The Crusaders trailed Lipscomb by three shots following Monday's opening round, but bested the Bison by six strokes on Tuesday, posting a team round of 315 to close the tournament three-shot victors with a score of 639. The tournament championship is the second in program history, with the only other coming last season at Valpo's own Crusader Spring Invitational. That tournament featured just three teams, however, as opposed to this tournament's 10-team field.

"The golf course this week was pretty difficult - a really hilly course, which is something we don't really see a lot and caused a lot of unlevel lies," said Crusader head coach Mat Blair. "I think that was part of the reason scores were a bit higher than normal tournaments. Overall, I thought our girls played well. I thought we minimized our number of big mistakes, for the most part, and just played well collectively as a team."

Valpo was led on Tuesday by senior Michelle Kleckner (New Brighton, Minn./Irondale), who shot a round of 76 to close out the tournament at 157, good for a tie for third place. Fellow senior Erika Pfaender (Pewaukee, Wis./Arrowhead) shot an 82 on Tuesday to finish in fifth position with a total of 158.

Freshman Angie Kim (Schaumburg, Ill./Fremd) matched Kleckner for the Crusaders' low round of the day, carding a 76 for a total of 163, coming home in a tie for 14th place. Sophomore Sibil Gill (Kokomo, Ind./Western) finished two shots back of Kim at 165, good for a tie for 17th after a round of 83 on Tuesday, while senior Brianna Davy (Schererville, Ind./Lake Central) rounded out the quintet of Crusaders with a final-round 81 to finish in a tie for 19th at 166.

"That's the one good thing about having a few years under our belts, is that now, we can go about seven to eight deep, as opposed to being maybe just five-deep before," said Blair on winning the tournament without Kelly Voigt, an All-League honoree last year, in the lineup. "It's really nice to have that flexibility in the team - to know that we can compete at every tournament with anybody we put on the golf course."

Valparaiso has next week off before returning to the links on Monday, October 7.