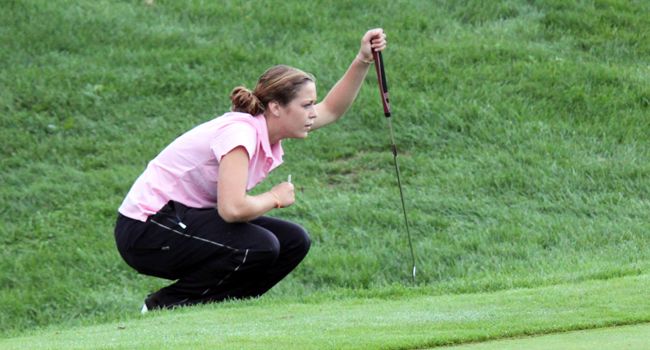 The Valparaiso women's golf team continued the 2013 fall season on Monday, splitting its squad between two tournaments in the Indianapolis area. Some of the Crusaders went to The 2013 Preview at The Hawthorns G.C. in Fishers, Ind., while others competed at the Butler Fall Invitational at Highland C.C. in Indianapolis.

The Crusaders sit in 14th place as a team after day one at The Preview after an opening-round 335 at the 36-hole event, but sit just nine shots back of sixth position. The team at the Butler Fall Invitational is in 10th place after the first of two rounds with a score of 351 on Monday.

Valpo had players shoot rounds of 79 at both events on Monday. At The Preview, senior Kelly Voigt (Palatine, Ill./Fremd) shot a 79 to reach the halfway point in a tie for 11th place out of 94 golfers. Meanwhile, at Butler's tournament, freshman Sydney Shrum (Cloverdale, Ind./Cloverdale) posted a 79 as well in the first round of the 36-hole tournament and will enter Tuesday in a tie for ninth out of 62 golfers.

Senior Michelle Kleckner (New Brighton, Minn./Irondale) was two strokes behind Voigt Monday at The Preview, shooting an opening-round 81 to sit in a tie for 27th entering the final round. Senior Erika Pfaender (Pewaukee, Wis./Arrowhead) is in a tie for 74th place, while freshman Angie Kim (Schaumburg, Ill./Fremd) is tied for 76th and sophomore Sibil Gill (Kokomo, Ind./Western) is in 90th place after the first round.

Over at Butler's tournament, sophomore Annie Gaugert (Lake Geneva, Wis./Badger) is in a tie for 48th position after the opening round, while junior A.J. Selig (Hortonville, Wis./Appleton West) is tied for 52nd and senior Brianna Davy (Schererville, Ind./Lake Central) sits in a tie for 56th place.

Valparaiso will conclude play at both tournaments with 18 holes on Tuesday.