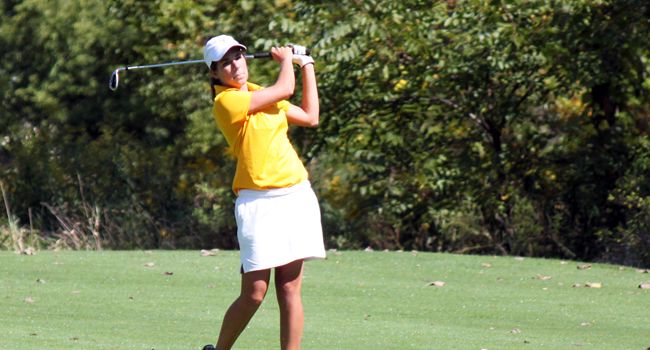 The Valparaiso women's golf team bested a trio of the four Horizon League schools it is competing against at the Dayton Fall Invitational in the tournament's opening round on Monday at NCR in Dayton, Ohio.

The Crusaders posted a team score of 329 for the opening round to conclude the first 18 holes in 13th place out of the 18 competing teams, finishing the first round ahead of Green Bay, Youngstown State and UIC. Detroit paces the team standings with an opening round score of 306.

Senior Michelle Kleckner (New Brighton, Minn./Irondale) led the Crusaders on Monday with an opening-round 79 to finish the first day of action tied for 23rd place. Sophomore Sibil Gill (Kokomo, Ind./Western) shot an 82 on Monday to end the day tied for 46th.

Junior A.J. Selig (Hortonville, Wis./Appleton West) finished the day one shot back of Gill, tied for 54th place after a first-round 83. Senior Kelly Voigt (Palatine, Ill./Fremd) is tied for 65th position following a round of 85 on Monday, while freshman Angie Kim (Schaumburg, Ill./Fremd) is one stroke further back at 86, tied for 68th place.

Valparaiso will conclude the Dayton Fall Invitational on Tuesday.