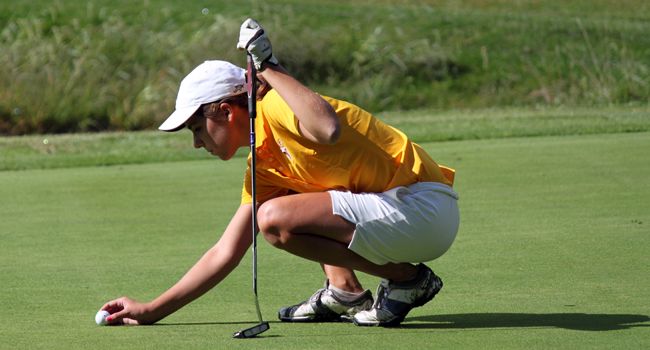 The Valparaiso women's golf team closed out its 2013 fall season on Tuesday at the Charles Braun Intercollegiate at Quail Crossing G.C. in Boonville, Ind., finishing in a tie for sixth place. The Crusaders posted their second-best 36-hole tournament score in program history.

The Crusaders shot a team round of 303 on Tuesday to post a 36-hole score of 604, finishing in a tie for sixth with Indiana State. Valpo was just five shots back of third-place Northern Iowa, while Loyola earned the team title with a score of 587. Valpo's two rounds at the tournament were the third and fourth lowest in program history, while the final score of 604 trailed just last season's Dayton Fall Invitational in the Crusader record books.

Sophomore Sibil Gill (Kokomo, Ind./Western) paced the Crusaders, shooting a round of 75 on Tuesday to finish the tournament at 148, good for a tie for eighth place. Her score of 148 marked the fourth-lowest 36-hole individual score in program history. Senior Michelle Kleckner (New Brighton, Minn./Irondale) posted Valpo's top round on Tuesday, closing the tournament with a 74 to come home with a score of 150, tied for 17th place and the fifth-lowest 36-hole score all-time at Valpo.

Senior Kelly Voigt (Palatine, Ill./Fremd) finished in a tie for 41st position at 155, while fellow senior Erika Pfaender (Pewaukee, Wis./Arrowhead) finished one shot back of Voigt in a tie for 47th at 156 following a round of 76 on Tuesday. Freshman Sydney Shrum (Cloverdale, Ind./Cloverdale) rounded out the Crusader team at 157 after shooting a 78 to close the tournament, finishing in 51st place.