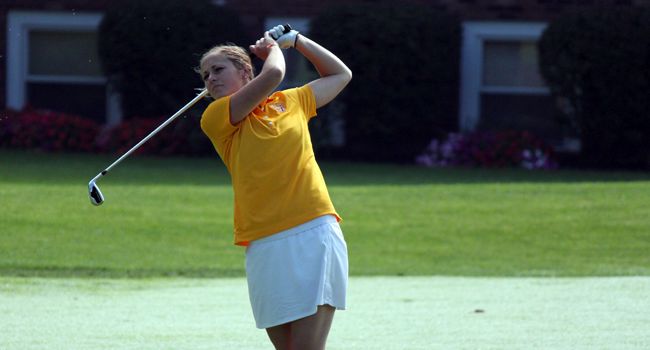 The Valparaiso women’s golf team finished out the IPFW Spring Classic at Chestnut Hills G.C. in Fort Wayne, Ind. on Monday afternoon, closing out the 36-hole event in ninth place as two Crusaders finished in the top-10 individually.

The Crusaders posted a team score of 331 in Monday’s final round to finish with a 36-hole total of 642, good for ninth place out of the 12 competing teams and just eight strokes out of seventh position.  Indianapolis won the team title with a score of 612, while Youngstown State’s Allison Mitzel captured individual top honors with a score of 147.

Valpo boasted an all-senior team at the tournament, and were led on Monday by Kelly Voigt (Palatine, Ill./Fremd), who posted her second straight round of 76 to finish in a tie for sixth place at 152.  Erika Pfaender (Pewaukee, Wis./Arrowhead) finished one shot back of Voigt at 153 following a final-round 77, good for a tie for ninth position.

Brianna Davy (Schererville, Ind./Lake Central) closed the 36-hole event in a tie for 58th position with a score of 173 over the two days of action.  Alyssa Cameron (Warsaw, Ind./Warsaw) rounded out the Crusader team score on Monday, improving by three strokes over her effort in Sunday’s opening round in finishing 64th with a score of 183.

Valparaiso takes part in its final prep tournament before the Horizon League Championship next weekend, as the Crusaders return home to host the Crusader/Jaguar Challenge at The Course at Aberdeen.  The two-day tournament begins Saturday.