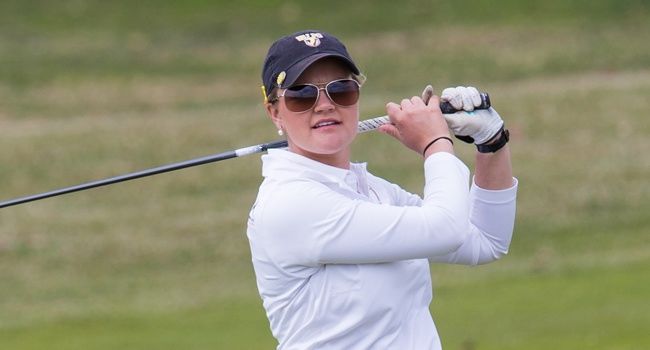 For the first time since September of 2011, the Valparaiso women’s golf team hosted intercollegiate action at The Course at Aberdeen in Valpo, as the opening round of the Crusader/Jaguar Challenge took place on Saturday afternoon.  Fielding two teams in the field, the Crusaders sit in third and fourth place after the opening 18 holes.

Leading the main Valpo squad was senior Erika Pfaender (Pewaukee, Wis./Arrowhead), who shot 39 over both the front and back nines on Saturday to close at 78 for the day, good for third place.  Fellow senior Kelly Voigt (Palatine, Ill./Fremd) was two shots back of Pfaender and enters Sunday in a tie for fifth place after an opening-round 80.

Senior Brianna Davy (Schererville, Ind./Lake Central) posted an 88 on Saturday, good for a tie for 18th place, while freshman Sydney Shrum (Cloverdale, Ind./Cloverdale) was one shot back in 23rd position after a round of 89.  Senior Michelle Kleckner (New Brighton, Minn./Irondale) rounded out the Valpo ‘A’ team with a 92 and ended the day tied for 26th position.

Leading the Valpo ‘B’ team was sophomore Sibil Gill (Kokomo, Ind./Western), who shot an 84 on Saturday and is in 11th place.  Freshman Angie Kim (Schaumburg, Ill./Fremd) and sophomore Olivia McCormick (Grant Park, Ill./Grant Park) each shot rounds of 88 to join the tie for 18th place.  Sophomore Annie Gaugert (Lake Geneva, Wis./Badger) is in a tie for 24th after an opening 90, while junior A.J. Selig (Hortonville, Wis./Appleton West) shot a 92 to tie for 26th.  Playing as an individual, senior Alyssa Cameron (Warsaw, Ind./Warsaw) posted an opening-round 98 in the windy conditions.

While the stroke play scores go down as the tournament’s official scoring, match play scoring was also tracked in the various head-to-head battles on Saturday.  The Valpo ‘A’ team fell to IUPUI, 3-2, with Voigt earning a 3 & 2 win in the second position and Pfaender winning 7 & 5 in the fourth position.  The Valpo ‘B’ team bested Saint Joseph’s College, 4-1 – Gill won 3 & 1 at the first position, Kim 4 & 3 at the second position; McCormick 5 & 4 at the third position and Selig 2 & 1 at the fifth position.

Valparaiso closes out the Crusader/Jaguar Challenge from The Course at Aberdeen with 18 holes on Sunday beginning at 10:30 a.m., weather permitting.