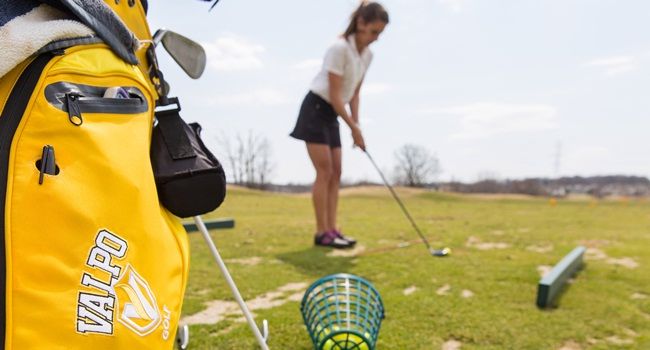 Senior Erika Pfaender (Pewaukee, Wis./Arrowhead) finished in third place individually to lead the Valparaiso women's golf team to a second-place finish at the Crusader/Jaguar Challenge on Sunday, contested at The Course at Aberdeen. Valpo also fielded a 'B' squad, which placed fifth. The tournament served as the Crusaders' final tuneup for the 2014 Horizon League Championship.

The Crusaders' main team easily finished in second place, improving by 13 strokes over Saturday's score with a team round of 322 on Sunday. Valpo finished with a 36-hole team score of 657, 18 strokes clear of third position. The Valpo 'B' team improved by eight shots with a score of 342 on Sunday and closed the tournament at 692. Indianapolis won the team title with a score of 622, while the Greyhounds' Jaclyn Schindler took individual top honors with a 151.

Pfaender was in fact the only non-Greyhound to place in the top-five, following up a first-round 78 with a 77 on Sunday to finish at 155, just one stroke out of second position. Senior Kelly Voigt (Palatine, Ill./Fremd) joined Pfaender with a top-ten finish, placing seventh with a score of 163 after a round of 83 on Sunday.

Senior Michelle Kleckner (New Brighton, Minn./Irondale) bounced back from a tough opening round to post a 77 to close the tournament, finishing in a tie for 13th at 169. Senior Brianna Davy (Schererville, Ind./Lake Central) improved by three strokes from her first-round performance, posting a total score of 173 to place 19th, while freshman Sydney Shrum (Cloverdale, Ind./Cloverdale) placed 24th with a 36-hole score of 178.

Meanwhile, the Valpo 'B' team placed two golfers within the top-15 of the individual standings. Sophomore Sibil Gill (Kokomo, Ind./Western) matched her first-round 89 with another 89 on Sunday to finish at 178, good for a tie for 11th place. Freshman Angie Kim (Schaumburg, Ill./Fremd) finished in a tie for 13th, one shot back of Gill at 179 after an 81 on Sunday.

Sophomore Annie Gaugert (Lake Geneva, Wis./Badger) finished in 26th place at 180 after a second straight 90, while junior A.J. Selig (Hortonville, Wis./Appleton West) was one shot further back, shooting 181 over 36 holes to tie for 27th. Sophomore Olivia McCormick (Grant Park, Ill./Grant Park) rounded out the Valpo 'B' squad with a 182 to finish in 29th position, shooting an 88 on Sunday. Playing as an individual, senior Alyssa Cameron (Warsaw, Ind./Warsaw) improved by six shots from round one to round two and finished in 32nd position with a total of 190.

Valparaiso takes aim at the 2014 Horizon League Championship in its next time on the links. The opening round of the 54-hole event takes place at the Mission Inn Resort & Club in Howey in the Hills, Fla. on Friday, April 25.