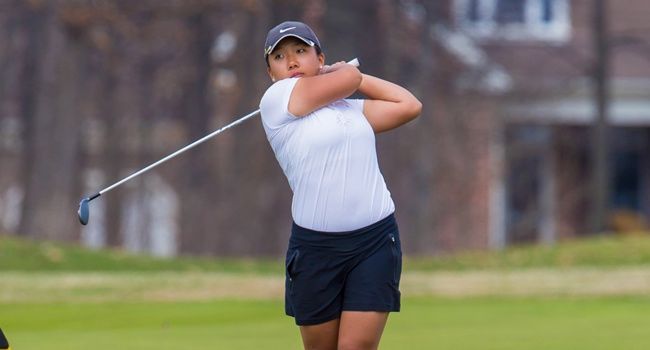 Playing in the Horizon League Championship for the first time, freshman Angie Kim (Schaumburg, Ill./Fremd) led the Valparaiso women’s golf team on Friday as it ended the opening round of the league tournament in fourth place out of seven teams.

The Crusaders closed the opening 18 holes from Mission Inn Resort & Club in Howey in the Hills, Fla. with a team score of 318, good for fourth place, just one stroke out of third position and just eight shots back of Oakland, which paced the field on the first day of action.  Youngstown State’s Emily Dixon leads the individual standings after day one thanks to an opening-round 73.

Kim had a steady opening round on Friday to lead the Crusaders, carding 11 pars and not posting anything worse than a bogey en route to a 78, leaving her tied for sixth place after day one.  Senior Michelle Kleckner (New Brighton, Minn./Irondale) closed the day tied for 11th place, one shot back of Kim after an opening 79 thanks in part to two birdies in the first five holes.

Sophomore Sibil Gill (Kokomo, Ind./Western), also competing in her first league championship, closed her day with a birdie on the 18th hole to card an opening-round 80, placing her in a tie for 15th.  Senior Kelly Voigt (Palatine, Ill./Fremd) is tied for 18th after 18 holes thanks to an 81 on Friday, while fellow senior Erika Pfaender (Pewaukee, Wis./Arrowhead) rounded out the Crusader team with an 83, leaving her in a tie for 24th place.