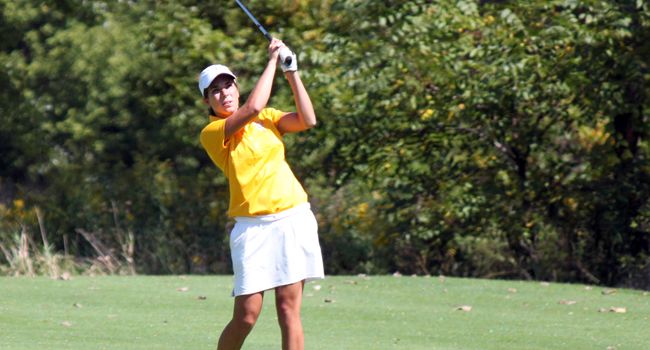 Led by an All-Tournament Team performance from senior Michelle Kleckner (New Brighton, Minn./Irondale), the Valparaiso women’s golf team closed out the 2014 Horizon League Championship Sunday from Mission Inn Resort & Club in Howey in the Hills, Fla. with a fourth-place finish.

The Crusaders were consistent over all three days of the tournament, shooting a final-round 319 to end with a 54-hole score of 957 for their fourth-place finish, just two strokes out of third place and just seven shots back of second position.  Detroit’s Lindsey Lammers won the individual title, posting a score of 228, while the Titans claimed the team championship with a score of 943.

Kleckner finished in a tie for fourth place to earn All-Tournament honors for the first time.  The senior was actually just one shot back of Lammers with eight holes to play before fading slightly, but still posted a final-round 79 to close at 234.  Sophomore Sibil Gill (Kokomo, Ind./Western) joined Kleckner in the top-ten, tying for tenth position after a second consecutive 79 gave her a 54-hole score of 238.

Senior Erika Pfaender (Pewaukee, Wis./Arrowhead) shot her second straight 80 to close the tournament on Sunday at 243, good for a tie for 15th place.  Fellow senior Kelly Voigt (Palatine, Ill./Fremd) finished up her career with a final-round 81, placing 22nd at 247, while freshman Angie Kim (Schaumburg, Ill./Fremd) wrapped up her tournament in 29th position with a score of 254.

The careers of five seniors – Kleckner, Pfaender, Voigt, Alyssa Cameron (Warsaw, Ind./Warsaw) and Brianna Davy (Schererville, Ind./Lake Central) – came to an end with the conclusion of the league championship.  Kleckner posted a scoring average of 78.7 over the course of her senior year, the second-best single-season scoring average in program history, while Kleckner, Voigt and Pfaender end their careers first, second and third on Valpo’s career scoring average chart, respectively.