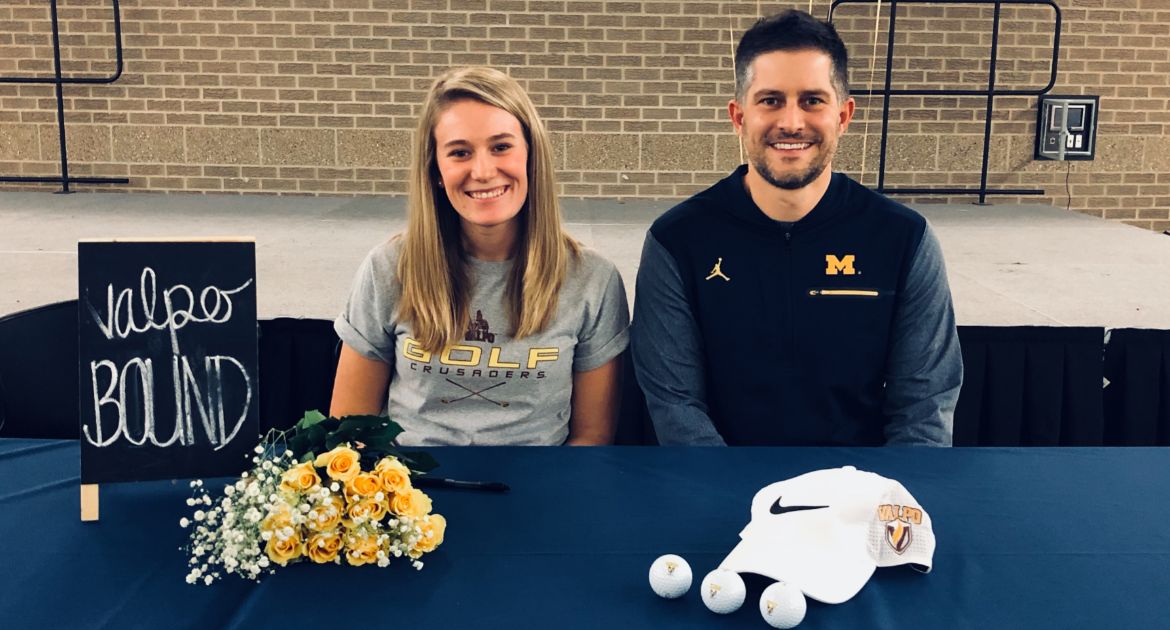 The Valparaiso University women’s golf team has announced the addition of Cailey Rooker, who has signed her National Letter of Intent to join the program for the 2019-2020 academic and athletic year.

Rooker, a senior at St. Joseph High School in Michigan, is a four-year varsity letter winner. She earned All-State First Team and All-State Conference Team all four years of her accomplished prep career. Rooker holds the individual nine-hole and 18-hole school records at St. Joe with scores of 32 and 71, respectively.

“Cailey had a good fall season this year,” Valpo head coach Jill McCoy said. “She has a great attitude and personality. She is extremely outgoing and is a hard worker. Those are traits that I want on our team. She and I had some connections outside of golf, and this felt like a good relationship that I wanted to grow. We can’t wait to have her join our program.”

Rooker comes from a Valpo legacy family, as she estimates that about seven relatives earned their degrees from the University. Her uncle Eugene Holland has gone on to thrive in his field after earning an engineering degree from Valpo. He has built numerous skyscrapers in Chicago and recently donated tools and devices to Valpo’s engineering program. Rooker also has family members who received education, law, music and nursing degrees from Valpo.

“I knew Valpo had a strong academic reputation in a variety of fields,” Rooker said. “I’m still undecided upon my major, but I know whatever I decide, Valpo will have a strong reputation. Coach McCoy has a lot of experience in the golf world and won a championship at Purdue. Everything about Valpo fits my needs.”

Rooker placed sixth in the 2018 state finals, has been a WSJM Athlete of the Week since her freshman year and was named the Burger King Outstanding Athlete at St. Joseph in 2018. She also qualified to play in the Four Winds Invitational hosted at Blackthorn CC for the 2018 LPGA Symetra Tour event.

“My strength on the course is my attitude,” Rooker said. “A lot of people expect themselves to play their absolute best all the time, but in golf you’re never going to have a day like that. I believe I have the attitude and work ethic to succeed in Valpo’s program.”

Some of Rooker’s fondest golf memories have come through participation in the First Tee program. She played in the 2017 Pure Insurance Championship at Pebble Beach alongside Colin Montgomerie and Tom Watson. Rooker was awarded the Wells Fargo Succeeding Together Scholarship and was a finalist to attend a national tournament in Wilmington, N.C. She shadowed Phil Mickelson on championship Sunday.

The chance to golf at the Division I level allows Rooker to follow in the footsteps of her father, who golfed at the University of Alabama. A two-sport athlete who has played No. 1 doubles in varsity tennis, Rooker excels academically as well. She has been a National Honor Society member since 2017, made the principal’s honor roll since her freshman year, is ranked in the top 10 percent of her class and holds an impressive 3.9 GPA. She is a member of the symphony orchestra and in March 2017 traveled with her school’s chamber orchestra to Pittsburgh for a national competition. The well-rounded Rooker played violin alongside The Piano Guys in a small group on stage at Lake Michigan College.

Rooker will soon continue to add to her list of academic and athletic successes during her time on Valpo’s campus.

“Taking any sport to the collegiate level is a whole new experience,” she said. “I’ll be facing competition that is out there to challenge me and I’m ready to learn from it. I take golf very seriously and I’m excited to play with and against girls who share that same attitude.”