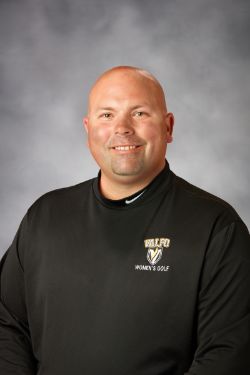 Mat Blair was named Valparaiso University's head women’s golf coach in June of 2011.  He enters his fifth season at the helm of the program in 2015-16.

Blair reloaded the Crusader squad last season in 2014-15 after graduating five seniors from the season before. Valpo posted four top-five finishes during the spring of 2015, including a fourth-place finish at the Benbow Invitational. The Crusaders finished fifth at the Horizon League Championship as well, just five shots out of third place. Individually, both Sibil Gill and Angie Kim cracked the top-six single season scoring averages in program history.

In 2013-14, Blair guided the Crusaders to their first full-field victory in program history, as Valpo bested nine other teams at the SIUE DoubleTree Invitational.  The Crusaders matched their fourth-place finish from the previous season at the Horizon League Championship as well.  Michelle Kleckner earned All-League accolades from the Horizon League for a second straight season with the second-best single-season scoring average in program history.  Kleckner also earned All-Tournament honors at the HL Championship as well.

The 2012-13 season saw Blair led the Crusaders to their best season since the program's inception, as the team posted a stroke average eight shots improved from the previous season.  Along the way, Valpo won its first tournament in program history - the Crusader Spring Invitational - to go with a pair of second-place finishes and a program-best fourth-place finish at the Horizon League Championship.

During Blair's first season with the Crusaders, he led the Brown and Gold to a runner-up finish at the Tennessee State Fall Classic, where Kleckner took individual medalist honors.  Erika Pfaender also earned Horizon League Golfer of the Week honors during his first season at the helm.

Blair's golfers have also experienced success in the classroom during his first two years as head coach, as Kleckner (three times) and Voigt have earned Academic All-Horizon League honors, while Kleckner and Pfaender each were named WGCA Division I All-American Scholars three times.  Blair also orchestrated the first home event in program history, the Valpo Invitational, in September of 2011.

Blair has been the teaching professional at Briar Leaf Golf Club in LaPorte, Ind. for the last five years.  With his private instruction, he has taught numerous All-State and All-Conference athletes, including the 2001 and 2006 Indiana High School state champions.

A Second Team All-State selection for Michigan City Rogers High School in 1990, Blair was a junior college All-American one year later at Anderson College in South Carolina.  He then went on to play three years at Ball State University.  He played on the Hooters Tour for three years and qualified for the Virginia Beach Open on the Nationwide Tour in 2005.