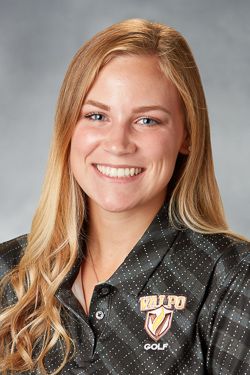 2021-22: Accrued a season scoring average of 83.81 while golfing 21 rounds and participating in eight of the team’s 10 events... Stroked a season-low 76 in the second round of the Indiana State Invitational on April 3... Earned Valparaiso University Top of the Class Award and Presidential Academic Honors.

2020-21: Named MVC Scholar-Athlete Honorable Mention… Posted an 84.73 average over 15 rounds spanning six events, ranking second on the squad in scoring average… Had a pair of sub-80 rounds at the Redbird Invitational in Normal, Ill. (April 9-10), setting her season low with a 79 in Round 1 and matching that in Round 2. Finished that event second on the team with a 241 over 54 holes… Posted the team’s best MVC Championship score at 252 over three rounds on April 19-20 in St. Charles, Mo… Earned Valparaiso University Presidential Academic Honors, MVC Commissioner’s Academic Excellence Award and MVC Honor Roll.