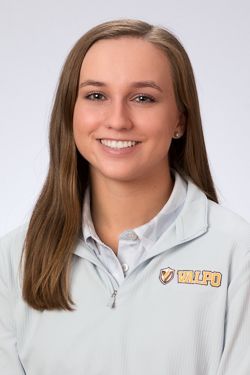 2021-22: Featured in MVC Scholar-Athlete Spotlight... Named MVC Scholar-Athlete Honorable Mention... Finished with a season scoring average of 81.15 and a career scoring average of 81.96 that ranks fifth in program history... Carded a 230 at the Butler Fall Intercollegiate (Oct. 4-5), tied for the eighth-best 54-hole tournament score in program history... Stroked a season-best 74 in the first round of the Benbow Invite on March 7... Valparaiso University Top of the Class Award and Presidential Academic Honors.

2020-21: Averaged a team-best 82.24 while golfing in 17 rounds over seven events… Led all participants with a 77 despite battling windy conditions in a Sept. 30 dual match vs. Grace College… Stroked a team-best 244 over 54 holes at the Diane Daugherty Invite in Kirkwood, Mo. (March 29-30)… Again served as the team leader with a 36-hole score of 158 (+14) while notching a top-20 finish in the ISU Spring Invitational in Terre Haute (April 4-5)… Turned in a season-low 76 in the second round of the ISU Spring Invitational on April 5 in Terre Haute… Had the team’s top finish for a third consecutive meet when she posted a pair of sub-80 rounds and totaled 237 in the 54-hole Redbird Invitational on April 9-10 in Normal, Ill… Finished the season with a career scoring average of 82.41 that ranked eighth in program history… Earned Valparaiso University Presidential Academic Honors, MVC Commissioner’s Academic Excellence Award and MVC Honor Roll.