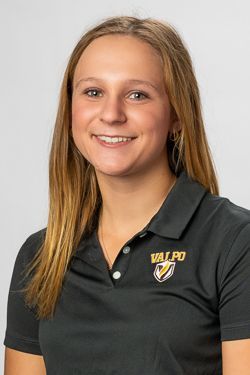 2021-22: Led the team in scoring average as a freshman at 80.96... Golfed in all 10 tournaments, totaling 26 rounds... Finished a hundredth of a stroke outside of the Top 10 in program history in single-season scoring average... Had a season-low 76 in the first round of the Butler Fall Invitational on Oct. 4.

Prep: Three-time Michigan High School Athletic Association (MHSAA) Division 2 First Team All-State selection (2018, 2019, 2020)… Finished in the top 10 at the state finals three times… A four-year varsity letter winner and two-year captain… Guided her team to three state championships (2017, 2018, 2019) and one state runner-up finish (2020) in her four years of high school… Was the regional medalist in 2019, earned all-conference accolades all four years and achieved first-team all-state status… Advanced to match play in the Golf Association of Michigan (GAM) Girls Junior Amateur… Owned a 4.1 grade point average and was an AP scholar with honors… National Merit Scholarship Program Commended Student, member of National Honor Society and attended Forest Hills Northern High School in the Spanish Immersion Program… Also competed in varsity tennis and basketball, helping her basketball team to a 2020 conference championship… In tennis, finished fourth in doubles at the regional championship and was a state semifinalist as a freshman in 2018. She also helped her team place fourth in the MHSAA Division 2 state finals in 2018… Was a Michael Sadler Foundation Gamechanger Ambassador, was a member of student government and was involved in her church’s youth group.

Personal: Comes from a legacy family, as her mother went to Valpo as did two of her aunts and uncles…. The University’s Lutheran roots and her family’s positive experience on campus also played a role in her decision.